For many decades, researchers and scientists had very little data about the various shark species available. From the experience of fishermen and divers, sharks were long thought to be solitary animals;hunters that migrated, lived and killed alone. However, in more recent years and with much investigation, sharks have been found to be quite social amongst themselves. Those that are solitary animals are usually those living along the ocean- or river beds, where they are permanently in search of food.

Even in the case of lone sharks, these ones often congregate with others of their species to breed or in an area known as a prolific hunting ground. In addition, some sharks merely prefer to travel in packs. The Scalloped Hammerhead Sharks may travel in packs of over 100 animals. Larger sharks definitely seem to dominate the smaller ones, particularly in feeding issues. In fact, the larger species often eat the smaller ones as they would any other prey.

Interestingly, although sharks have been considered to be relatively unintelligent animals, they have been observed displaying cooperative and insightful behaviour. They have been seen to be curious and able to work in packs to solve a problem (e.g. moving a large dead whale into deeper waters). 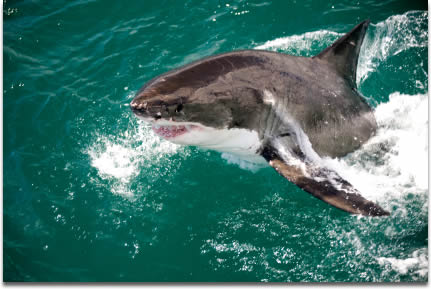 Certain shark species do sleep. However, it is done with a level of consciousness as the eyes are open and aware of the surrounding activities. In this state, the shark is also actively pumping water over its gills to ensure that its oxygen levels are maintained despite not moving. Not all shark species are capable of this, however, and some are forced to keep active. Select species are thought to keep only half their brain asleep during their sleeping hours, so that the other half is awake and alert at all times.

Shark behaviour is increasingly becoming a matter of deeper investigation as researchers begin to delve into some of the mysteries of these notorious and beautiful animals.