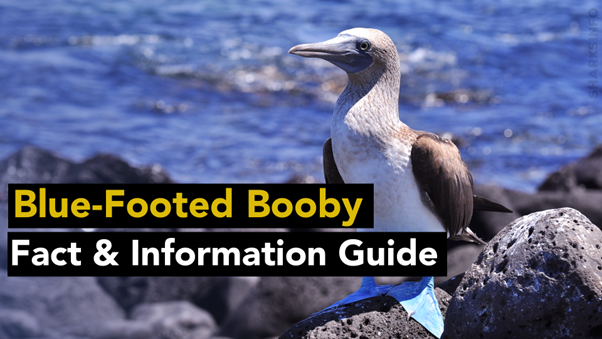 Blue-Footed Booby – scientifically named Sula nebouxii, belongs to the family Sulidae. Interestingly, there are only 6 species in the genus Sula, out of which the Blue-footed booby is called “Boobies”. These species are easily recognizable as they have blue feet which distinguish them from the rest of the species. Not only this, there is much more interesting about the blue-footed booby which needs exploration.

Where In The World The Blue Footed Booby Is Distributed?

The Blue-footed booby is a marine bird found commonly in the tropical and subtropical waters of the Eastern coast of the Pacific Ocean and the Galapagos Island. Other than that, one can also sight them in the Gulf of California, Peru, and South America. Marine bird prefers to live near coastal waters rather than open waters.

What Is The Appearance Of Blue-Footed Booby?

As the name indicates, these unique creatures have bright blue feet which distinguish them from the rest of the species. The Blue boobies are around 32 inches or 81 cm in length and weigh approximately 3.3 pounds or 1.5 kg. They have large brown-colored wings that measure about 5 feet and cover the entire body. Their belly is white-colored, the beak is dark blue-greyish colored, and have small round eyes which are pale yellowish.

Why The Blue-Footed Booby Has Blue Feet?

Amazingly, the feet of the Blue boobies are of bright sky-blue color which is due to the accumulation of pigment called carotenoids. The boobies feed on a diet that is rich in carotenoids, which accumulate in the feet turning them bright blue, indicating the healthiness of the species.

What Is The Diet Of Blue Footed Boobies?

The diet of Blue-footed booby solely consists of fishes, most probably keeping an on the small schooling fishes such as anchovies, sardines, flying fishes, and mackerels while gliding over the surface of the water, usually from the height of 80 feet or even more.

How Do Blue Footed Booby Hunt Their Prey?

Well, the Blue-footed boobies are skillful hunters and swimmers. They use unique tactics to hunt their prey. First, they watch prey from a height of 100 meters or more. Once, they sight the prey, the boobies hit the water with a speed of 97 km/h and take a deep dive of 25 meters under the water to grab the prey. Simple!

How Do Blue-Footed Booby Breeds?

The Blue Footed Boobies breed once a year, the courtship begins when the male start flaunting his feet, dancing and whistling in front of the female booby. The selection of the mate depends upon the bright-colored feet of the species. At the end of mating rituals, the females lay eggs in a depression on the ground after 4 to 5 days. After the incubation period of 41 to 45 days, 2 to 3 chicks hatch from the eggs. The males provide food to the young ones and females protect them from danger – sharing their responsibility. On average, the species can survive as long as 18 years.

What Is The Conservational Status Of The Blue Footed Booby?

Approximately, 40,000 species of the Blue Footed Booby breed reside on the Galapagos Island where they have been protected for a long term but in a last past few years, the population of these species has been declining due to the change in the climatic conditions, global warming and the acidic water of the ocean. However, IUCN categorized the Blue Footed Booby as Least Concern.

Blue Footed Booby are remarkable species that attract people’s attention because of their blue feet. Well, some of the other interesting facts about them are listed below:

1:  The name of the Blue Footed Booby has Spanish origin which comes from the word Bobo meaning Foolish.

2:  According to an estimate, 80,000 species of Booby are found all over the globe, half of which live on the Galapagos Island.

3:  They usually hunt during the daytime at sea and sleep on land at night.

4:  The Booby have Blue feet which help them to attract a mate.

5:  If they have pale feet, it indicates the species is unhealthy.

6: Males and females look similar, however, females are slightly larger than males.

7:  They have blocked nostrils which prevent the water to enter the brain while diving deep in the water.

9:  The babies of the Blue Footed Booby do not have feathers and blue feet at the time of birth. They have greyish-white feet.

10:  The species lower their body temperature by opening the mouth and shaking the neck skin – looks like they are laughing.

The blue-footed booby is the only species of the genus Sula that have blue feet, distinguishing them from the other species. Half of the population of Booby resides on the Galapagos Island as they feel protected there. Physically, the species are brown colored while the feet are bright bluish due to the accumulation of carotenoids. They hunt their prey at a remarkable depth of 25 meters or even more. Interestingly, during the breeding season, the males attract females by dancing, flaunting their bright feet, and whistling for mating rituals. However, these species are listed under the category of Least Concern in the Red list of IUCN.