The Blue Shark, so called for is indigo colouring, is characterised by an elongated, rather prominent, snout. It also has long, pointy fins, a lengthened body and particularly large eyes, giving it the appearance of being somewhat perpetually interested and curious. They reach an average length of approximately 3.8 metres and, despite this relatively large size, are known for being able to leap right out of the water and achieve impressive speeds of up to 35 kilometres an hour, although some have reported them as swimming at approximately 97 kilometres per hour! However, more research is necessary in order to prove these claims.

The Blue Shark favours squid as its most preyed upon meal. However, it is not very fussy and will eat almost anything that is available. Its teeth are serrated and have a pointed end, enabling this animal to pierce and hold onto its slippery prey with ease. Because it is rather easily pleased by the presence of almost anything perceived as prey, the Blue Shark has made some attacks on people, becoming notorious amongst divers, as these sharks do not venture too close to the shore. As in other shark species, there are rows of teeth present, each row being in a progressively different stage of development. As the front teeth fall out or break, new ones replace them from the next row. 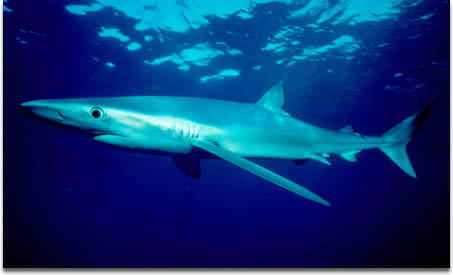 The Blue Shark is pelagic, meaning that it prefers the open ocean to the shallow basins or coastlines. It can survive only in a marine environment (as opposed to a fresh water one). They are found in almost all oceans and seas around the world, with the exception of the Antarctic waters and other very warm locations.

Those in the Atlantic Ocean migrate to follow the warmer waters, despite generally preferring cool waters. They travel along the North American coastline past the Caribbean to Europe, Africa and back to the Caribbean.

Blue Sharks frequently form packs or groups, all the members of which belong to one sex and are more or less similar in size. Their reason for behaving in this manner is yet unknown. Blue Sharks are officially classified as being Low Risk / Near Endangered.

This is a viviparous species, which means that their litters of fewer than 10 to over 120 pups are nourished from a yolk-sac placenta and the live are born young.

Gestation lasts for between nine months and one year and sexual maturity is experienced between five and six years of age for females and between four and five in males. During :courtship:, the male will bite the female as an indication that he intends mating with her. For this reason, females have skin three times thicker than that of their male counterparts.

The biggest threat faced by the Blue Shark is that of fishing, as millions of individual animals are caught every year. The meat and fins are used for consumption and the skin for leather and leather products. The oil produced in the liver for buoyancy is also in high demand.