The Bull Shark is also known as the Zambezi Shark, Nicaragua Shark or Whaler Shark. They have become notorious for their attacks on divers, swimmers and bathers as they prefer shallow coastal waters and display unpredictably aggressive and vicious behaviour. Together with the Great White Shark, the Bull Shark presents somewhat of a danger to humans (while not being all that significant, it is merely more than other, more docile species).

The Bull Shark is stout and fairly large with a distinctly wide body. Males reach just over two metres, while females average a length of 3.5 metres. Its upper side is dark grey, while the belly (or pectoral side) is just off white. There are two dorsal fins, the first being much longer than the one closer to the tail. The teeth are serrated and extremely sharp, designed for tearing at flesh, turtle shells and bone. These are arranged in a series of rows, which fulfil different purposes. The first two rows are responsible for seizing the prey, for example. 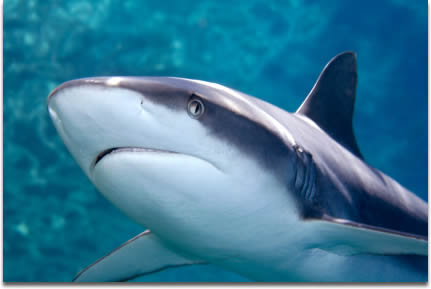 The Bull Shark is not fussy regarding its diet. It favours other sharks, crustaceans, birds, turtles, dolphins and rays, but will consume whatever is available, if necessary. They usually bump their victim hard before taking their first bite of its flesh, and many divers have reported being bumped in such a manner, sometimes quite badly hurt.

Bull Sharks live in tropical and sub-tropical oceans all over the world, favouring shallower areas and coastlines. It is a common shark and has relatively high population numbers. It can also survive for certain periods of time in fresh water, and it can be found in rivers and lakes, presenting even more of a danger to unsuspecting bathers. In fact, there are over 500 known Bull Sharks in the Brisbane River alone. However, it is not accurately classified as a freshwater shark.

The Zambezi Shark is viviparous, which means that it feeds its foetuses off a placenta in its uterus or oviduct and then gives birth to live young (as opposed to eggs hatching, whether internally or externally). Litters are made up of anywhere between one and 13 pups, which measure an impressive 70 centimetres when born. The gestation period lasts for approximately one year and pups are born in safe areas, where other predators are unlikely to spot them, during late summer and early autumn. They usually remain in these areas until they are bigger and stronger, able to defend themselves in the open ocean.

Some Bull Sharks have been found to migrate. Those found in the Amazon River travel thousands of kilometres to reach the ocean on a seasonal basis.

Although being a common and somewhat vicious species, the Bull Shark remains an important contributor to the equilibrium of the oceanic environment, one that needs protection from hunters and careless fishermen as well as from pollution and development.