Sharks are feared the world over, particularly by those that are not completely informed regarding their behaviour and motivation. However, in addition to their being magnificent and fascinating creatures, they are also vital to the continued conservation of the marine environments of the planet.

They are at the top of the underwater food chain and, without them, the population numbers of their various prey will explode to uncontrollable levels.

Maintaining biodiversity is essential, not only for ensuring that other fish and mammals do not multiply unabated, but also for the stability of the marine environment in terms of how predators, prey and the ecosystem work together. Another important reason to conserve this group of animals is that these hunters will naturally hunt prey that is sick or weak. This ensures that these ones do not hold their peers back and that only the strongest and fittest specimens survive, creating a subsequent generation of beable animals. 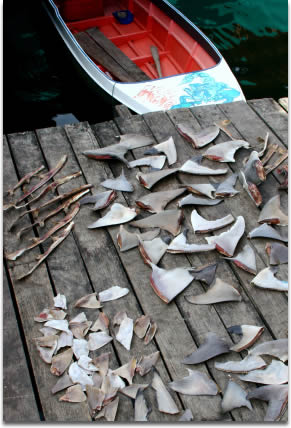 One of the major challenges faced by sharks is the fact that they are slow to reach maturity and their reproductive capacity is considerably lower than many other marine animals. Their gestation period needs to be long enough for the pups to develop sufficiently, and sharks generally give birth to small litters, required to fend for themselves from birth. This puts them in a particularly vulnerable position when it comes to maintaining their population numbers.

Another huge challenge is the fact that there is an ever-increasing demand for shark products. Their fins are frequently cut off while they are still alive, the rest of the body being tossed back into the ocean to die a traumatic death, and many species are hunted for the oil inside their liver (used for buoyancy).

Tens of millions of sharks die every year and some species have lost over 90% of their population numbers in the past two or three decades alone. Because these animals are viewed as ruthless killers, few governments are prepared to put their conservation into legislation.

Pollution and structural development place additional strains on the number of sharks in our oceans. As oil, filth and toxic fumes are inflicted upon the earth and its waters, fewer and fewer animals are able to survive. The seabed is being destroyed and the climate changes (effected largely by the damage we cause to the environment) make for increasingly challenging habitats in which to live, where food and clean, oxygenated water is becoming more of a luxury. This does not only have a direct impact on the sharks, but on their prey, which places more strain on these carnivorous fish.

Various organisations, such as the Shark Research Institute, are working hard to ensure that the public and the governments are made more aware of the dangers facing these creatures and the steps required in order to preserve our natural resources. One of the major approaches is to use sharks to create sustainable tourist initiatives, since this is where people can be educated and funding can be obtained. This is particularly important in developing countries, where locals have not had the opportunity to learn about the value and importance of sharks.

Local fishermen also need to be aided financially (to avoid them trying to make easy money on catching sharks) and need extensive education. With increased tracking (both via satellite and by visual means) and improved studies on the habitats, habits and DNA of the sharks, it is hoped that more control can be accomplished over the lives and deaths of the animals. Then, various publications and education initiatives are necessary to convey the information gleaned from such research and tracking to the public, young and old. It is hoped that this will instil a sense of respect and responsibility towards the sharks, to replace the current attitude of dread and hatred.