Various shark species are found in all of the oceans and the vast majority of the seas of the world. There are even a few select species that are able to live and thrive in freshwater rivers. The Bull Shark and the River Shark can survive in both fresh- and saltwater due to special adaptations. Most sharks can be found between the water’s surface and 2000 metres down. Below 3000 metres, it is unlikely to find these creatures;the major factor influencing their positioning being where their prey is likely to be. Inhabiting such a large percentage of all of the globe’s oceans makes sharks one of the most prolific fish species alive.

There are certain species that can be found in very specific areas of the world. Other species, like the Great White Shark, can be found in almost all of the major bodies of seawater. The majority of sharks opt for slightly warmer waters since they are cold-blooded. Species like the Shortfin Mako, Basking and Whale sharks live in both tropical and polar seas. Sleeper Sharks prefer the icy waters of the Arctic, where they remain all year round. 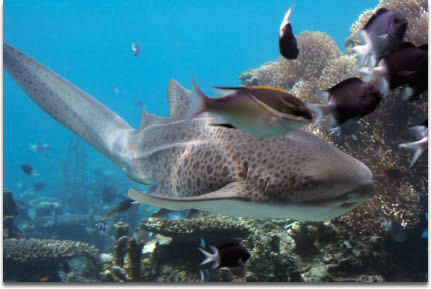 Bull Sharks can live in seawater or freshwater and occupy the well-known waters of the Zambezi River, Lake Nicaragua, Lake Ysabel, Tigris River, Mississippi River and the Atchafalgya River. Even the Red Sea is home to the Bigeye Houndshark, otherwise known as the Lago omanensis. This animal lives approximately 2 200 metres below the surface of the water.

One of the most common (and feared) sharks in the world is the Great White. This creature has been found in the waters off Australia, South Africa, Japan, most of South America, Hawaii, the Gulf, the east coast of the United States of America, West Africa, Scandinavia, the eastern coast of China, Alaska, New Zealand, southern Russia and the Mediterranean Sea.

although it prefers the warmer waters, it is clear that this species is not averse to the chilly waters of the northern hemisphere, particularly around Alaska and Canada. The larger Great Whites have been known to swim across oceans, underlining their need to be able to adapt to different conditions and temperatures.Due to the fact that research on these varied and magnificent fish has only begun in recent years, there remain many mysteries around their distribution, habitat, behaviour and anatomy. With increased interest and funding, researchers will continue to uncover the exciting secrets that sharks have to offer.