Of all the animals on earth and in the oceans, sharks have the most acutely developed electroreception abilities. This sensory perception enables them to detect and interpret the electric field that is emitted by animals as well as by the earth itself. It is used to hunt prey that may be concealed from vision and even as a gravitational device and stabiliser.

The electroreception ability is enabled by the Ampullae of Lorenzini. These are modified sensory organs situated on the snout or nose of the shark and can number from a few hundred (for the more placid sharks) to well over 1000 for active hunters and killers. The Ampullae of Lorenzini are made up of a large pore, filled with a jelly-like substance. Gelatinous secretions are stored in cylindrical canals, which are attached to these bulbous pores. Minute sensory cells line the walls of each pore. These sense even faint electrical impulses from the environment around the shark and transmit the message to the sensory nerve at the base of each pore. 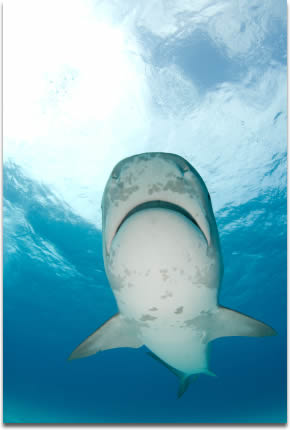 Tiger Shark swims by at Tiger Beach in the Bahamas.

This nerve sends messages directly to the brain to inform the shark of gravitational electro-sensations or those of nearby prey. So acute is this sensory ability that they can detect a change in voltage of 10 millionths of a volt. The Ampullae of Lorenzini are also able to detect changes in water pressure and temperature, although this is to a far lesser degree.

The electroreception ability present in sharks is a significant survival tool as it allows them to seek out and find prey that is hidden behind rocks or even under sand just from sensing the natural electrical signals emitted by all animals. The prey is unable to control this emission of impulse, regardless of how motionless it remains. When an animal or person is injured, they emit erratic electrical impulses, attracting the shark. Interestingly, this is thought to be the reason that a shark-bite victim will continue to be attacked by the shark while their rescuers remain within their immediate vicinity without being bothered by the animal at all.

This is also the reason that a shark being offered visible and clear bait alongside a boat will often bite the propeller of the boat or the cage in which the divers are nestled : these items emit a stronger electrical signal than the food or divers themselves. This is also the basis for the belief that, although sharks use their senses of sight and smell to track prey, they switch to their sense of electroreception once they are close to the prey in order to make the final attack.

The specific adaptations of the shark for its survival in watery hunting grounds are truly impressive. Not only are its senses of sight and smell particularly enhanced for hunting and navigating with minimal visibility, but the Ampullae of Lorenzini and its electroreception abilities have ensured that these magnificent animals are able to thrive under some of the most challenging conditions.