Shark fins have long been the cause of the death of many of these magnificent animals. They have been used for their medicinal and edible qualities (shark fin soup being a well-known delicacy, particularly in Asia), and many sharks have had their dorsal fins cut off while still alive, left to die a painful and stressful death. Apart from the import and value placed on these fins by humans, they also play an integral part in the shark’s movement in terms of forward propulsion, buoyancy and direction.

The shark’s fins are rigid and elongated. They are supported by cartilaginous, non-segmented rods called ceratotrichia. This strength and rigidity helps the animal to move swiftly and with agility, particularly useful when in pursuit of prey that darts away. 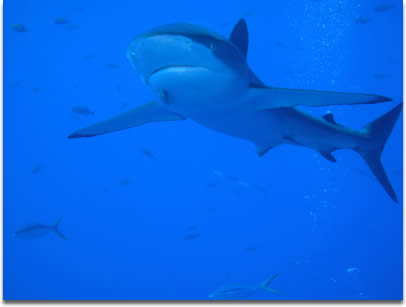 There are five different types of fin on the body of a shark, each with its own function:

1.Pectoral Fins sharks have a pectoral fin behind the head on either side of its body. These are often elongated and are used to keep the shark from sinking to the bottom of the ocean, as well as for steering the fish.
2.Pelvic Fins these are also paired fins, which occur further down the body, closer to the tail. They are on the ventral side (or underneath) of the shark and act as stabilisers to prevent the shark from rolling to the left or right.

3.Dorsal Fins depending on the species, there may be either one or two dorsal fins. The first dorsal fin is the most prominent as it is situated on the top of the animal, behind the head. This is frequently the fin that is seen sticking out of the water. The dorsal fins keep the shark :upright:, i.e. prevent the body from tipping or rolling over. If there is a second dorsal fin, it is much smaller and positioned further down the torso, in line with the pelvic fin. Some sharks present with spines on their dorsal fin(s).
4.Anal Fin not all shark species present with an anal fin. It is situated between the pelvic fins and the tail on the bottom of the body (the ventral side). These are also used for stability.
5.Caudal Fins these are also known as the tails of sharks. The animal swishes this fin from side to side in order to propel its entire body forwards. The nature of this fin does not allow for backwards movement. Therefore, if a shark needs to move away from an object, it is forced to either drift backwards or to turn away from it and continue in a forwards direction.

A shark is required to move swiftly and without being detected to allow it to hunt prey effectively. The fins are vital for their quick, agile movements and their impressive speed. Their design reflects ingenuity and insight.