This remains one of mankind’s most feared sharks, both because of inaccurate information and because The Great White Shark has, indeed, been responsible for a number of attacks (sometimes fatal) on swimmers, surfers and divers. However, Great Whites are also most fascinating, revealing much about the physical features, habitats, diet and breeding patterns of sharks in general.

The Great White Shark belongs to the Lamniformes and is one of the largest predatory fish in the world. It reaches an average length of between four and six metres. This is more than three times the length of the average human! These sharks can live for anywhere between 30 and 100 years and reach sexual maturity at about 15 years of age. They are currently on the C.I.T.E.S. (Convention on International Trade in Endangered Species) Endangered Species list. 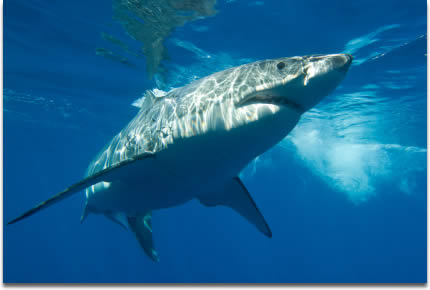 This species has a white ventral side and a grey dorsal side. This makes it difficult to see from the top or bottom, aiding in its stealthy approach upon prey. It has a large snout, which needs to be particularly tough as it receives impacts during attacks. The shark can replace its teeth as they break off. Once prey has been seized between these mighty saws, the shark shakes its head in much the same way as a dog, tearing off chunks of meat, which are then swallowed whole. One bite can tear off a 14 kilogram piece of flesh. This is usually why attacks on humans are fatal. The shark does not necessarily intend to kill the person. In fact, after one taste, it usually leaves the victim as it does not like the taste. However, so much damage has been inflicted in one bite that the person is usually badly injured or killed.

Great White Sharks dominate depending on size and sex. Females are larger than males and are, therefore, dominant. In general, they do not fight one another physically, but rather use rituals to ward off potential threats and competition. Biting is usually the last resort in the case of another Great White coming too close or to assert authority. This species of shark has been observed spy-hopping, which refers to its lifting its head out of the water to catch a glimpse of potential prey and perhaps even to smell it.

The Great White usually approaches prey from below and favours dirty water or bad lighting. Prey is most commonly attacked near the water’s surface. The exceptions are dolphins and porpoises, which are attacked from above to avoid being detected via the prey’s sharp echolocation ability.

The Great White Shark is set apart from other sharks by its technical warm-bloodedness. A web of veins and arteries are situated on each side of the shark’s body and work to warm the blood and conserve this heat. The internal temperature is kept at a relative constant and is above that of the water. This means that energy can be spent hunting and swimming rather than trying to warm the body up. Technically, this classifies the Great White as an endothermic poikilotherm (meaning that the internal body temperature is not regular, but is kept at a constant, irrespective of the temperature of the water).

This shark species is ovoviviparous, meaning that eggs are fertilised and hatched internally. The hatchlings then remain in the mother’s oviduct, feeding off the remaining egg yolk until they are strong enough to be born into the ocean and live an independent life. These pups display behaviour known as oophagy, which dictates that the first of the hatched babies eat their weaker siblings within the womb. Little else is known about mating, gestation or birth.