The approximate 500 different shark species can be found in all of the oceans and the vast majority of the seas throughout the world. Because water covers an enormous percentage of the earth’s surface, this implies a significant number of animals inhabiting its depths.

There are a small number of shark species that are able to live in freshwater rivers and lakes as well. Most sharks live between the water’s surface and 2000 metres down. It is rare to find sharks living at 3000 metres or more below sea level, but it has been witnessed. 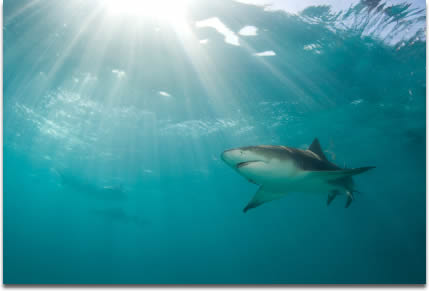 A lemon shark – Negaprion brevirostris – swims above as a burst of sunlight breaks through the ocean’s surface.

While most sharks are found in the area up to 2000 metres below sea level, certain species prefer specific levels, mainly due to the prey available and the temperatures experienced at those depths. Sharks that prefer the open ocean are called pelagic sharks and include the notorious Great White and the Basking Shark.

Those that skate along the ocean floor are known as benthic sharks and include the Wobbegong, Angleshark and Zebra Horn Shark. The Bull Shark frequently leaves its oceanic habitat and travels into freshwater rivers, such as the Mississippi, which has actually needed to be equipped with special means of stopping these animals from swimming miles up.

The oceans hold about 96% of the entire water supply for the earth. However, different areas possess different characteristics (topography, proximity to land, depth, temperature, and so on). Therefore, some areas are densely populated by marine plants and animals, while others are less so. Sharks tend to prefer the shallower continental shelf areas. This is because these are the areas at which rivers deposit nutrients into the oceans.

These nutrients feed the marine lives in this water from a cellular level, which, in turn, feed larger and larger species. The chain continues until it reaches predators such as sharks and even human beings, who feed off fish, crustaceans and molluscs. While humans tend to interfere with nature’s equilibriums, sharks play a vital role in maintaining them. Therefore, the value of the river’s nutrients cannot be underestimated when considering sharks chosen habitats and the viability of their survival therein.

Certain shark species will remain in a fairly confined habitat for their entire lives. Others, such as the Blacktip and Tiger sharks, may migrate for short distances (up to 1000 miles). Highly pelagic species are capable of travelling across entire oceans. Examples of these include the Blue Shark and the Mako. Migration is generally for the purposes of feeding and breeding. Having to traverse such extensive areas means that those species require special adaptations to allow for the changes in temperature, topography and perhaps even prey.