The Hammerhead Shark is, as its name implies, recognisable by the flattened extension on either side of its head. These extend outwards to give it a rather strange appearance, resembling a hammer. With the exception of its off-white belly, the Hammerhead is gray, with some specimens exhibiting a brownish tinge on its upper side.

There are two dorsal fins, the first of which is much larger than the one closer to the tail and is particularly pointy. Hammerheads average approximately 3.5 metres in length, although certain specimens measuring up to six metres have been found. The size depends on the species of Hammerhead, of which there are nine. 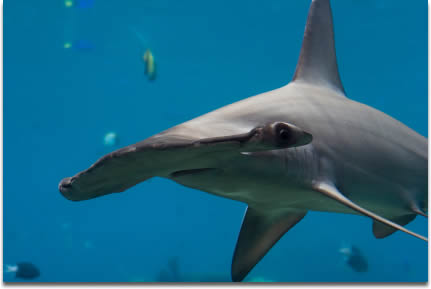 Close-up of a Scalloped Hammerhead Shark – Sphyrna lewini – with fish in the blue background.

It has a greater surface area over which its Ampullae of Lorenzini are distributed, making it particularly receptive to electric impulses emitted by other animals as well as by the earth (allowing it to navigate despite a possible lack of visibility).

Hammerhead Sharks are found in all the temperate and tropical oceans of the world, favouring shallower areas like coastlines and continental shelves.

Its vertebrae display a rather different structure to those of other sharks, and it is believed that this plays a major role in these

sharks: abilities to manoeuvre as quickly and accurately as they do. The hammer shape of the head provides extra lift, making these sharks some of the most buoyant alive. Their eyes are positioned far apart, allowing for a 36-degree view of their surroundings, as are their nostrils, increasing their range of smell.

Hammerheads tend to stick to the ocean floor, sometimes hunting in large packs of over 100 sharks during the daylight hours. However, at night, they hunt alone.

Hammerhead Sharks, like humans, give birth to live young that have been sustained in the uterus by a :placenta:, which is actually a yolk sac placenta or pseudoplacenta. This is called viviparity in the case of sharks. A Hammerhead Shark was the first shark known to demonstrate asexual reproduction (where a female produced young without the input of a male).

In addition, they are one of the few animals, along with pigs and human beings, that can suntan as their skin becomes darker with increased exposure to harmful rays when swimming close to the water’s surface.