The mouth of Heterodontiformes appears to be somewhat puckered and is filled with two completely different, types of teeth, hence the scientific name meaning “different teeth”. The front teeth are conical and sharp, ideal for grabbing and holding wriggling prey. The back teeth are flat and rounded, designed to crush and grind food once seized. 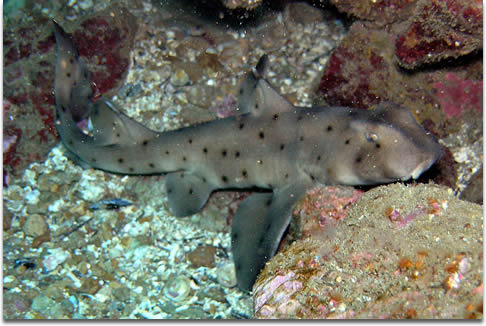 Heterodontiformes are oviparous, which means that, once fertilised internally, eggs are laid and left to hatch. The cases in which their eggs are protected are known for their bizarre appeal. They are spiral to some extent, almost helical in shape.

They have a visibly spiral pattern on their outer covering, which allows them to be wedged into cracks in underwater rock formations to ensure that the eggs inside are kept safe from predators. These take five months to 1 year to hatch and pups measure between 14 and 24 centimetres at birth (depending on the species).

Bullhead Sharks are bottom-dwellers, wriggling along the ocean bed in search of food. Bullheads feed during the night as they are nocturnal. Young sharks generally feed on worms in the sand, while the older sharks will hunt small fish, crustaceans and molluscs. They grind up and swallow the entire animal and then bring up the hard pieces after swallowing, creating quite an unattractive spectacle.

They prefer shallow waters, such as those near the coast, of a maximum depth of about 300 metres.

Temperate and tropical oceans are favoured, and Heterodontiformes cannot survive in fresh water (such as in lakes and rivers). They are found primarily in the eastern and western parts of the Pacific Ocean and in the western part of the Indian Ocean.