Hexanchiformes are a group of sharks, also known as Cow Sharks, which live in the deepest and coldest waters of the world’s oceans. As such, they are particularly difficult to track and research, so little is known about this specific group. The Frilled Shark was included within this group, but has now been moved as it is so different.

Hexanchiformes are stout and stocky in build. They have an anal fin (not present in all shark species) as well as a dorsal fin situated closer to the tail than most other shark types. The name “hexanchiform” means “six arches” and refers to the number of gill arches present in this group. However, many also have an extra set of gills, totalling seven gill pairs. This occurs in Heptranchias and Notorynchus, while the Hexanchus have only six pairs. Hexanchiformes do not possess a nictitating membrane, which is commonly used for the protection of the eyes. Their jaws are underslung with thorny teeth at the top and very differently shaped teeth at the bottom (closely resembling a cockscomb). 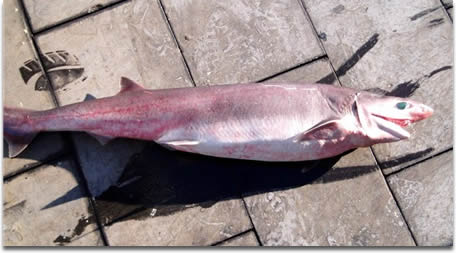 Hexanchiformes are ovoviviparous. This means that the eggs hatch inside the female’s body until the young are capable of living independently, at which time they are born alive into the ocean. As with other species, these sharks do not care for their young, and newborns quickly swim to safety as soon as they are born so as not to be devoured by their mother.

Hexanchiformes are marine sharks;they cannot survive in fresh water. They usually live in the deep outer continental shelf and slope waters. While they can be found in the Atlantic, Indian and Pacific oceans, they tend to prefer cold, deep waters.

However, they will rise to more accessible depths during certain seasons in search of food. This occurs from July to December just off the coast of Canada and has proven most rewarding for curious divers desiring to catch a glimpse of these elusive animals. They usually feed on Spiny Dogfish (another shark species), Lingcod, Cabezon and the Pacific Hagfish.

The Broadnosed Sevengill Shark is an exception to the Hexanchiform group as it prefers shallow coastal waters and can even live in manmade aquaria. It prefers temperate waters and has been found off the coasts of South Africa and California, amongst others. While the other sharks of this group have specially adapted eyes that are very sensitive to light, the Broadnosed Sevengill is able to thrive in well-lit waters. This predator is known for its voracious appetite and its willingness to consume anything edible. It has also been known to be aggressive towards and even attack humans.

The largest hexanchoid is the is the Bluntnose Sixgill Shark at 15.5 + feet in length, while the smallest, the Sharpnose Sevengill Shark, reaches a maximum of about 4.5 feet in length.