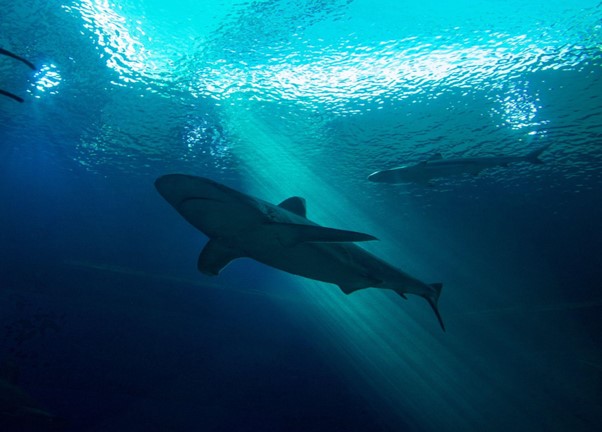 Diving with sharks is no doubt one of the most incredible lifetime experiences! Sharks are the most powerful, distinctive and majestic creatures of the deep seas and oceans because most of the unusual and primitive species of sharks thrive in the darkest parts of the extended oceans, at unconceivable depth! No one knows the accurate depth at which sharks can dive because many of the shark’s species living in the depth have been seen rarely and are barely studied!

In this article, we are going to reveal how deep a shark’s swim can be, so join us as we dive deeper to discover more about them!

How deep can a shark swim?

Well, the swimming capability of sharks depends upon the type of species, some of the sharks are found swimming near the shoreline or in the middle of the oceans whereas the slow moving sharks are spotted mostly near the surface of the ocean. But talking in general, sharks can swim from about 10,000 to 12,000 feet deep in the ocean.

Why do sharks dive deep in the open water?

Many sharks’ species are thriving in the twilight zone – an area extended from 600 to 3,300 feet or sometimes spotted even more at depth below the surface of the ocean. This region of the ocean has no light, high pressure and less availability of oxygen with cold temperatures. Despite many difficulties, the number of sharks living in this zone is 10 times more than we see near the shoreline. The reason behind the deep dive of sharks is the food such as squids, algae, crustaceans which are in abundance at the bottom. Furthermore, to protect themselves from enemies and other predators, sharks swim deep to hide them in the dark.

Which sharks can swim deep in the ocean?

In the shark’s kingdom, there are many species which swim much deeper, beyond our imagination. Here we have listed some species that are known to swim deep in the open waters:

Portuguese Dogfish sharks: These sharks are known to swim the deepest of all the sharks in the realm because the species are spotted swimming at the depth of 12,057 feet! Incredible! They are widely distributed in the open water but are mostly found near the floor of the deep seas and oceans.

Cookie-cutter sharks: These are the smallest known sharks in the world but interestingly, they are found swimming at the depth of 12,100 feet. During the day, at 3, 200 feet you can easily spot them

Greenland sharks: The most incredible species of sharks that swims at the depth of 7, 200 feet. The species shows migratory behaviour every year based on the depth as they prefer to live at an unimaginable depth.

Blunt-nosed six gills sharks: These sharks prefer to live in the tropical and temperate water of Atlantic, Pacific and Indian oceans and enjoy swimming at depths ranging from 300 feet to 6,500 feet.

Frilled sharks: Frilled sharks are the oldest known species, they are also named as living fossils because they are the 2nd oldest shark’s species living in the ocean water. The frilled sharks have been barely spotted by humans as they are found at depths ranging from 390 feet to 4,200 feet underneath the water surface.

Mega-mouth sharks: The megamouth sharks also live so deep that they are rarely spotted by humans. These sharks spend most of their time in the darkest depth of 3,280 feet and come near the shoreline only at night.

Kite-fin sharks: The shark’s species are native to tropical and subtropical waters where they take a deep dive of 660 to 2,000 feet or may go even deeper to a depth of 5, 900 feet.

Goblin sharks: Goblin sharks are active predators but slow swimmers, they enjoy swimming at depths from 900 feet to 3,150 feet or they can also be spotted deep at 4,300 feet.

Swell sharks: The unique species of sharks live in the Pacific Ocean at the depth of 1,500 feet. They are found mostly thriving at the rocky bottom so that they can hide in the rocks.

Final words Sharks – the apex predators have been living in the deep seas and oceans for a long time. Sharks are always found swimming in search of food and enjoying the ride in the open water. The deep dives of sharks vary from species to species. You may spot some sharks near the shoreline but there are 10 times more species living deep in the ocean that are rarely spotted by human eye. According to the studies, on an average, sharks can swim at depths ranging from 300 to 12,000 feet.