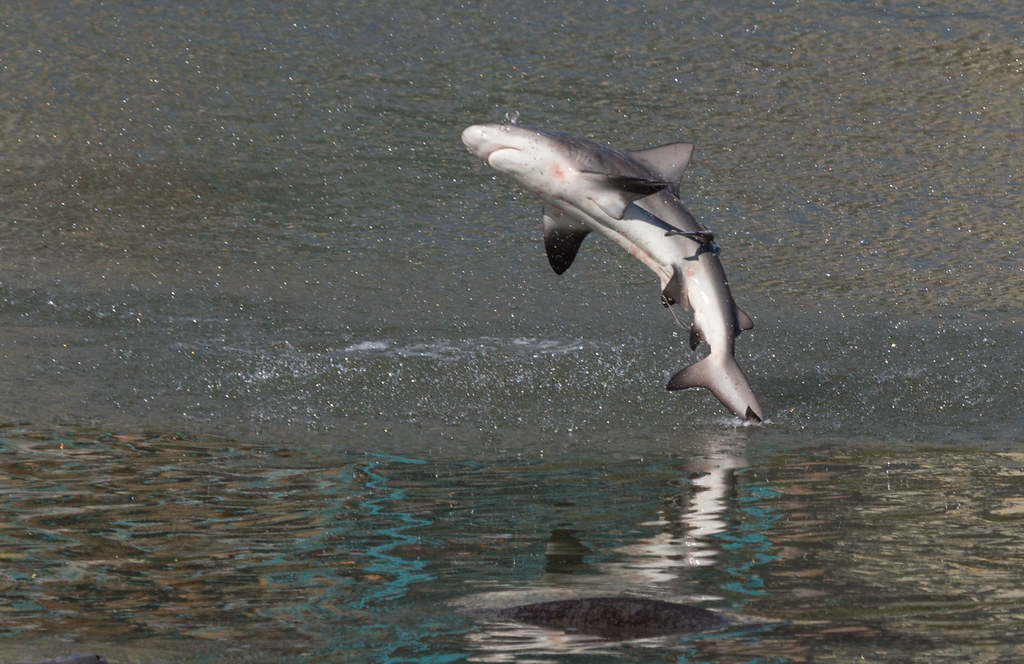 As you learn more about sharks, the more fascinating they seem, as demonstrated, for instance, by their leaping ability. A truly remarkable experience that is sure to be an eye-opener for everyone who visits and gets the chance to see sharks jump out of the water. The ability to leap out of the water was previously thought to be limited to dolphins, but we now know that sharks share this ability. However, not all species can do this–only a few.

But, when it comes to how high a shark can jump, we really don’t know the answer so far. Considering the shark’s habitat, strength, and power, it is thought that they can jump really high, but it’s important that we know the right figure.

When sharks jump out of the water, sometimes they’re catching fast-moving prey such as seals, and sometimes just for fun; whatever the reason, this spectacular behavior always leaves visitors awestruck.

Let’s take a close look at the details and see if it is true that sharks can only jump 10 feet.

How high can a shark jump out of the water?

It is no secret that sharks have existed for ages, even long before trees and dinosaurs. Each of the over 500 species found in the world’s oceans has its own unique characteristics, features, and capabilities. The same is accurate for their ability to leap. But for sharks that can jump, how high can it be?

Don’t forget that most sharks are large in size, and they have tons of weight, so they will need an impressive amount of energy to propel themselves out of the water. This might be the reason that shark-jumping is not so common and is rarely seen.

Recorded data indicates that sharks can generally spring up to 10 feet above the water. So, it seems like a true figure, as indicated earlier. But, as we have seen that each shark has different capabilities, and so is how high they can jump.

A great white shark, for example, has been said to break the record by jumping up to 15 feet above in the air.

Moreover, the species known as the Mako sharks are said to be able to jump as high as 9 meters above the surface of the waters; it is almost 29 feet high in the air. As you can see, that is huge variability.

Are sharks able to jump out of the water like dolphins?

As far as technical terms go, it’s not the same, nor is the reason for jumping. As you can see, dolphins jump almost regularly, and they do this mainly for fun.

Moreover, they also perform some actions such as flipping. On the other hand, sharks jump occasionally and most often to target their prey.

Other reasons dolphins leap out of the water include enhancing visibility, eliminating parasites, and improving navigation.

Do you know how sharks swim and how they maintain buoyancy?

What shark species can jump?

As we have previously mentioned that not all sharks are able to jump, but only a few species have the capability; the question is, which one are those?

You should know how to identify sharks before we list down their names, as you might mistakenly think of dolphins as sharks.

So, below are the names of the shark species that can leap out of the water.

Having said that, sharks must expend a lot of energy in order to propel themselves out of the water, which is why it is relatively rare to see sharks leaping from the water.

Perhaps you came here after watching a viral video showing a shark jumping on a boat and were curious about how far a shark can jump. Well, 8 to 10 feet is the average shark jump, but depending on the species, it can be much higher.

If you’re interested in learning more about sharks and their amazing abilities, we recommend checking out which oceans have the most sharks, and if you are afraid of water, you can head to Georgia Aquarium, featuring various different shark species.