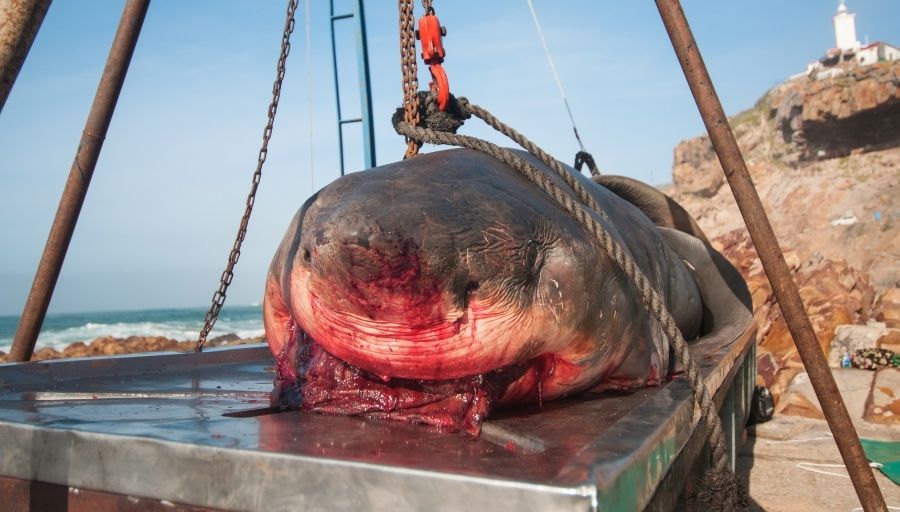 Shark species around the world face the constant threat of human presence and interference within their natural habitat. Hunters and fishermen are frequently responsible for the deaths of these magnificent marine predators, whether it is intentional or accidental. Some estimate that 100 million sharks are killed each year globally. The majority of these killings are due to shark fishing.

Sharks Deaths Due To Fishing

Every year, millions of animals, many of which are sharks (as well as dolphins, turtles and whales) become entangled in fishing nets and shark nets. As sharks struggle to free themselves, they soon become exhausted. Their weakened bodies collapse, crushing their organs and suffocating them.

Shark nets have been designed to capture and kill shark species that are perceived to be dangerous. As such, they are responsible for the deaths of countless shark species as well as many other harmless animals, including precious endangered species. Fishing nets, although not designed to trap sharks, indiscriminately scoop up any animal that is unfortunate enough to be in the water through which they are dragged..

There are also hunters that target sharks for their fins, meat, skin and the oil found in their livers. Their beautiful skins are used for leather products. It is ideal because it is smooth, yet very durable. The fins are considered to be a costly delicacy. A bowl of the famous shark fin soup sells for about 100 US Dollars in Japan. In order to save time (and, therefore, money), the hunters often simply slice the fin off living sharks and toss the animal back into the water to die a slow and painful death.

In the late 1980’s, the horrific consequence of these fishing nets was witnessed when 32 Japanese fishing boats embarked on a mission to catch three million squid. They used drift nets, which are simply dragged through the water, trapping anything in their paths. By the end of their excursion, they had also captured (and, consequently, killed) more than 58 000 Blue Sharks, 52 Fur Seals, 914 dolphins, 141 porpoises, 25 Puffins and 22 marine turtles.

The liver is very large in proportion to the shark’s body. It contains an oil that is a lot less dense than water, which is the main way in which the shark stays buoyant. Humans have found this oil to be rich in minerals and useful for making a variety of products. However, there is nothing that can be found in or made with shark liver oil that cannot be done with vegetable oil, making the slaughter of these animals for this purpose completely unnecessary.

Some countries have implemented legislation to protect certain shark species from being hunted. Usually, those that are protected are the species that reach sexual maturity at a more advanced age, produce only small litters at a time and have longer periods between litters. These species cannot boost their numbers at a rate that is faster than the hunting. Therefore, they are under enormous threat of extinction if humans are left to kill them indiscriminately. The Great White Shark and the Grey Nurse Shark are both examples of such species.

The hunting or killing of sharks has a number of negative impacts, both direct and indirect. These include: