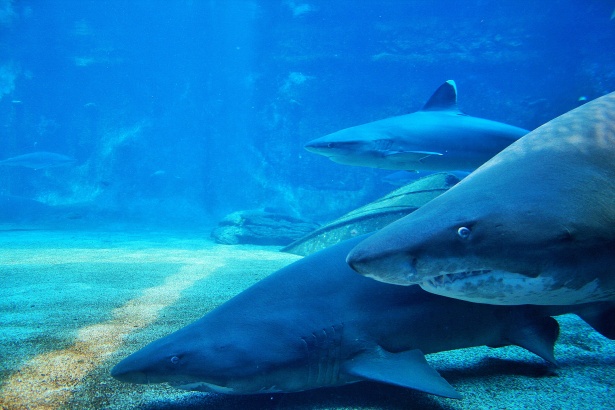 Documenting sharks in the wild is not an easy job; it requires a lot of experience and your willingness to drive into the ocean of knowledge for correct identification. Underwater darkness and migratory activity of sharks from one place to another reduces the visibility and the time available to gather evidence necessary to identify sharks. Sharks can be recognized mostly on the basis of their appearance, we have provided information regarding the unique characteristics of sharks so that you were able to identify them whenever you met them!

Not all sharks are similar but there are some of the unique features that are common in all of them and make them distinctive from the other ocean creatures and help to correctly identify the shark’s species. Here is the list of unique features of sharks.

First and foremost, sharks were identified on the basis of their body. Typically sharks have a fusiform shape of the body, meaning rounded from both ends, this shape of sharks help them to swim deep in the ocean and requires a minimum amount of energy. However, some sharks have flattened body shape like angel shark and wobbegong shark have extremely flat body shape.

2: Sharks have different pairs of fins

Fins are the rigid structures which are supported by rods made up of cartilage; mostly sharks have 5 pairs of fins,

Sharks can be identified on the basis of different pairs of gills they bear, most species of sharks have 5 pairs of gill slits but some may have 6 pairs or even others have 7 pairs. These pairs of gill slits are located on the side of their head, the gills are covered with tiny membranous structures that extract oxygen from the water, which is utilized by sharks for respiration as sharks do not use atmospheric oxygen to respire.

Sharks bear a special type of electro-receptive organ called Ampullae of Lorenzini, these are the small jelly-like pores which are located around the head, near the nostrils or underneath their snout. These sensory organs help to detect the electric field produced by other animals in the ocean water, the electric fields help the shark in navigation and to locate their prey or enemies far away from them.

5: Sharks have multiple rows of teeth

One of the most important features that makes sharks distinct are their jaws and teeth. Sharks possess multiple rows of teeth that continue to replace one after the other and are lost completely but do not have jaws attached to their head. The teeth of sharks are considered remarkable because teeth were the only part of their body which has been fossilized or remained intact for thousands and millions of years ago and provide knowledge about their evolutionary history as well.

As you know that sharks do not have bones so to keep their body in accurate shape, the skin of sharks is usually hard and tough and bears small scales like dermal denticles which helps in reducing the friction and resistance between water and sharks so that they can easily swim in the ocean without using much energy. Moreover, the denticles grow in size as the size of shark’s increases and also protect the skin from injuries.

Sharks can also be distinguished by various patterns of their tail, all species of sharks have quite unique designs of tail. The tail of sharks helps them to swim faster and provide balance when they are in motion so that they can slide elegantly to different sides. Their tail is made up of cartilage so it gives them a very smooth and flexible movement when they swim or float.

8: Sharks have skeleton made up of cartilage

The skeleton is another feature which differentiates sharks from bony fishes and other terrestrial vertebrates. The shark’s skeleton is made up of cartilage and connective tissues, the cartilage is flexible and sturdy which reduces the weight of the skeleton and thus saves sharks energy when they swim in deep oceans. Moreover, the skeleton also provides protection to ribs because the ribs are without rib cage so there are high chances that they could be crushed easily by their own weight.

Most fishes in the aquatic ecosystem have a swim bladder filled with air which provides them buoyancy when they swim but it’s not the same in case of sharks, they have large liver filled with oil droplets which reduce the density and give sharks a hydrostatic lift when they are swimming. The weight of the liver could make up to 25% of the total weight of the shark’s body, they usually store fats in the liver which provides them energy when they have to travel long distances.

Sharks have very well developed senses used for hunting as well as communication:

Vision: The structure of sharks eye is remarkable, the size of pupil changes in response intensity of light. They have rods to sense light or dark spectra and cones which helps them to see different colors, a layer of tapetum lucidum is present behind the retina which aids them so they see much better in dark, cloudy water or deep in the sea at night.

Taste: Although sharks do not have a very robust sense of taste, the taste buds located in the mouth and throat allow them to taste their food before they swallow it. This avoids the intake of dangerous prey items, which might have a bad taste.

Smell: As they swim, water passes into their nostrils and across sensory cells, they are able to distinguish different chemical signals produced in the water by other animals. A nostril of sharks can also detect the smells and depict the direction from where the smell is coming.

Hearing: Sharks have two minute openings on their head or behind and above their eyes that leads to internal ears. These sensitive cells help sharks to detect low-frequency sounds and to capture suitable prey swimming and flapping in their vicinity.

Touch: Sharks do not have fingers but they possess lateral lines running from head to tail, these lines can also be used to feel and touch. The lateral line bears small pores that allow the flow of water through shark’s skin, these pores are called “neuromasts” that can sense different vibrations in the water.

Sharks have a number of characteristics which makes them distinct from the other species, the cartilage skeleton, presence of gill slits, various types of fins,  jaws and teeth, tail patterns and remarkable senses makes them different from other water creatures. The information given in this article will help you to find out that the creatures you have just seen in the ocean water are either sharks or not?