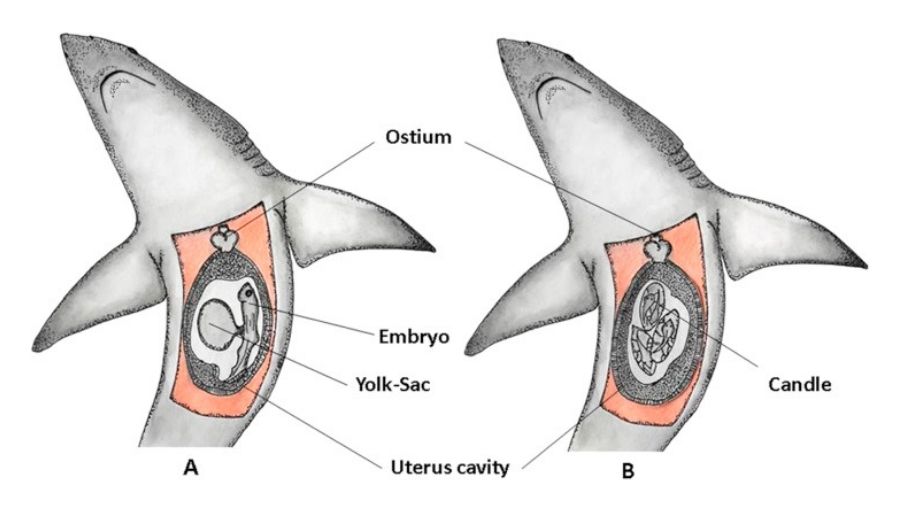 This means that the female keeps her embryos inside her oviduct, feeding them from a placenta, until they are ready to be born.

How Viviparity Works In Sharks

Mating occurs between a male and a female shark, during which he enters her oviduct with his clasper and deposits sperm. This sperm then fertilises several of her eggs.

The process up until their birth has resembled that of so many mammalian species, including human beings.

However, after birth, the mother does not nurse or care for her young. Rather, they are merely viewed as her next potential meal. This sets this unique group of animals apart as instinctual, born hunters.

Do Shark Have A Placenta?

Yes, viviparous sharks are born form a placenta. Once the eggs have been fertilised, a placental link is created between the embryo and the nutrient-rich placenta.

The number of fertilised eggs and resulting embryos depends on the shark species and can range from just a few to several dozen.

During the gestation period, which is usually fairly long but differs in length amongst the species, the young pups are sustained within the mother.

Embryo Developent In The Placenta

The placenta provides all of the nutrients that the embryo needs. This gives them the opportunity to develop and mature as far as possible so that they are born strong and able to fend for themselves.

Once fully developed, the pups are born alive into the ocean. They immediately leave the vicinity of their mother – who automatically becomes a predator – to live, hunt, mate and migrate independently.