Sharks have long been feared and even worshipped by mankind. However, for centuries, little was known about these fascinating creatures. In recent decades, researchers have committed to learning about and studying these animals in more depth, which has yielded some fascinating facts and has cleared up many myths.

•The smallest shark is the Dwarf Shark, which is approximately the length of the average man’s hand.

The largest shark is the Whale Shark, which is about the length of a bus.
•Every year, sharks attack approximately 100 people, of which about 10 result in a human fatality. On the other hand, human beings kill 10’s of million’s of sharks every year for their skin, fins, meat and liver oil. This would imply that humans are far more dangerous than sharks.
•There are approximately 350 different species of known sharks.
•A large meal may last the shark up to three months without it having to eat again.

•Sharks are at the top of the underwater food chain.
•More people are killed every year by bee stings, lightening or soda machines falling on them than by sharks.
•Sharks attack more men than women.
•The Bull Shark can live in fresh water or sea water.
•Sharks can hear a fish swimming over one mile away, and can smell one drop of blood in a million drops of water.
•The upper and lower jaws of the shark are able to move, unlike humans and most other animals.
•By counting the rings on the shark’s vertebrae, one is able to gauge the age of the animal.
•A shark may lose and grow up to 30 000 teeth in its lifetime.
•Two-thirds of the brain of a shark is dedicated to its sense of smell.

•Oil in the liver is what keeps the shark from sinking as its density is lower than that of the surrounding water.
•In Fiji and the Solomon Islands, people are not allowed to eat the meat of the shark. These animals are believed to possess mighty spirits of dead ancestors.
•Even hundreds of years ago, people used shark teeth for the creation of weapons and tools.
•Swimmers have a one in 300 million chance of being killed by a shark.
•The Oceanic White-tipped Shark is the most dangerous living shark in terms of human attacks as it does not fear divers or swimmers.
•The Portuguese Shark can dive more than 1.5 miles, or 2.7 kilometres, below the surface of the ocean. 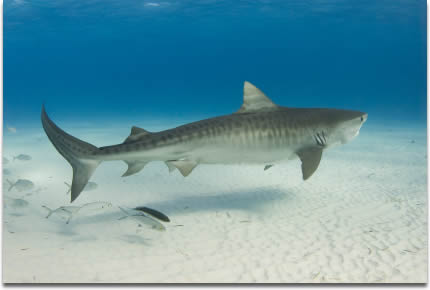 A Tiger Shark – Galeocerdo cuvier – swims along the shallow water.

•Females are usually larger than males and have thicker skin to withstand the bites of males wanting to mate with them.
•Shark pups begin their hunting and killing before they are even born by consuming their weaker siblings inside their mother’s oviduct.
•Sharks can detect the electrical impulse emitted by a standard AA battery one mile away.
•There are approximately 75 species of shark on the endangered list.