All sharks are carnivores, meaning that they only feed on other animals, not plants. This has major implications in terms of the strength and structure required from their jaws. The jaw needs to be powerful and flexible. It needs to grab and hold prey, and then rip and tear at it. Further, it needs to push moving prey into the mouth to be swallowed.

Sharks do not chew their food, but gulp it down in huge chunks. Because the shark’s skeleton contains no bone, but only cartilage, areas requiring extra strength and support, like the jaw, need special adaptations. 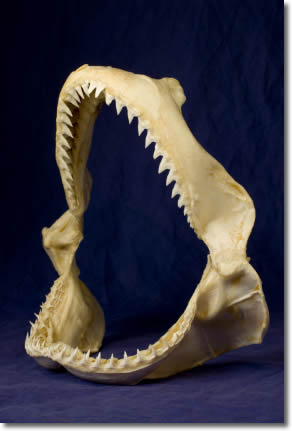 The jaw of these impressive hunters is not attached to their cranium, which usually acts as the supporting structure in most other animals. Rather, it is supported by tesserae. These structures are tiny crystal blocks, made up of calcium salts, which are hexagonal in shape. They are arranged into plates, much the same way as a mosaic floor or wall would be. These plates are as strong as bone, but not nearly as rigid or as heavy.

There is usually only one layer of tesserae. However, larger shark species, like the Great White, Bull Shark or Tiger Shark, require extra strength. In these animals, there may be between two and five layers of such plates, depending on the size of the specimen.

The snout of the shark is also made of cartilage. However, this substance is much softer and spongier in this area, called the rostrum, than in the rest of the body. This is because sharks are frequently involved in violent or tactile encounters with other animals, and their snouts are required to withstand far more impact than the rest of its body. This soft cartilage absorbs such impact, lessening the strength of the blow.

Shark jaws are in demand as items of décor around the home, particularly for fishermen and hunters. When cleaned, they present an impressive indication of the sheer size and power of the magnificent animals. Some jaws exceed 7 feet in width! To prepare the jaw for exhibition, it is removed from the head and cleaned of all meat and blood. There is also a membrane covering the back teeth that needs to be removed. The jaw is soaked in a solution for 12 hours, which rids it of any oils and dirt, and is then put into bleach for about 5 days to sterilise it and to ensure that it is pristine and white. The next day sees the jaw in detergent for a final clean.

Thereafter, stainless steel wires are places around the jaw and tightened to suit the shape of the jaw. The jaw is left for about 6 weeks in this state, with the wires being checked and tightened on a regular basis. Then, the jaws are examined for holes, scratches and similar marks and a rotary tool is used to remove these and smooth the edges and gum line. Finally, the jaw is sandpapered for a smooth finish, cracks are filled and the entire specimen is given two to three layers of taxidermist lacquer.