The Nurse Shark is a large fish that skates along the bottom of the ocean in search of tasty morsels. It is generally sluggish and relatively harmless to divers and swimmers. The only time that Nurse Sharks have been seen making attacks is when they are provoked by human beings. They are generally nocturnal and, because of their low activity levels as well as their relatively small size (usually averaging a length of approximately two to four metres), these are ideal sharks for captivity. 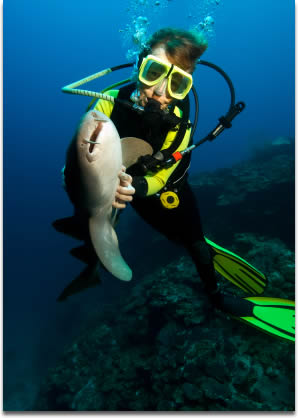 Trailing along the ocean bed, Nurse Sharks feed mainly off the crabs, lobsters, stingrays, sea urchins, coral, shrimp, squid and octopus that share this habitat. Interestingly, they have been seen grazing on algae and coral when not in hunting mode. With prey that possesses such hard exoskeletons, it is imperative that the Nurse Shark have incredibly powerful jaws.

In addition to its ample jaws, the Nurse Shark is also characterised by a wide head, obvious barbels, a stocky body and an unusually smooth appearance. There is a clear spiracle behind each eye, which is used for respiration and is not, as some have the opinion, an ear. Its teeth areserrated and scalloped to resemble a fan.

Nurse Sharks prefer shallow waters that are warm. They live near sandy beaches or sandbars as well as in coral reefs as these present with an ocean floor close to the water’s surface. Nurse Sharks live predominantly the on continental and insular shelves of the western Atlantic and eastern Pacific oceans. When the water temperatures drop, depending on the season, Nurse Sharks increase their activity levels to maintain a higher body heat rather than opting to migrate to warmer waters.

During the day, Nurse Sharks will rest on the sea bed, often in groups of dozens of sharks at a time. They will lie in a heap, piled on top of one another, waiting for nightfall, when they will begin their search for food.

Nurse Sharks are ovoviviparous, meaning that eggs are fertilised and hatched inside the female’s body, where they remain until they are developed enough to be born into the ocean and live independently of parental training.

While pups are still in the mother’s oviduct, they display cannibalistic behaviour, eating immature embryos for nutrition. After a gestation period of about six months, approximately 25 pups are born.

The Nurse Shark is slow and lazy during the day, making it easy for divers and fishermen to capture. Their skin makes for excellent leather, their flesh is edible (eaten fresh) and their liver is in demand for the oil it holds.

For these reasons, the Nurse Shark, although somewhat protected for its lack of aggressive behaviour and its proximity to the ocean floor, remains threatened by its greatest predator, mankind.