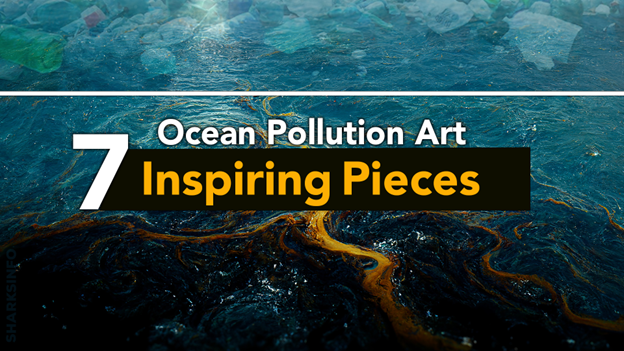 Nature is life’s greatest asset, and it demands attention, value, and care. But humans are not missing a single opportunity to destroy our natural environment. Life in water, as well as life in terrestrial areas, are both suffering because of the hazards of pollution caused by humans. Marine life is in severe danger because of the accumulation of liquids (like oil, bleach, and pesticide), trash, dirt, plastics, etc.

People lack empathy towards this alarming situation; on the other hand, nature demands transformation and the newest ways to reach people’s consciences. In such a situation, art can play its role wonderfully because it is able to grab the human mind’s attention doubtlessly. Artists from across the globe are persistent in bringing change and transformation by creating mesmerizing ocean pollution artwork.

Let’s have a look at how these talented artists are playing their roles and putting their utmost efforts into saving the ocean and marine life through their artwork.

Bristol Whale is one of the most inspiring pieces of art. Its installation portrays a whale swimming in a sea of plastic water bottles. The water bottles and debris used in this project were actually collected from Bristol beach. The message conveyed by this piece of art is should be taken seriously because these things that are causing ocean pollution are creating serious life hazards for marine life.

Some artists create environmental wall works in which they show the different layers of oceans. The plastics, trash, and different types of liquid thrown by humans have caused the most horrible situations for life underwater. So, artists have generated the idea of Wallwork frames, which manifest how complicated the layers of the ocean are trapped in pollution.

The sea globe is an artificial globe created by a very talented artist. The whole world of the ocean is portrayed in this sea globe but not the natural one. Rather it was filled with plastic bottles, trash, and other things that cause ocean pollution. The artist has given extra importance to the details and showed how marine life is struggling with this ocean pollution.

The dead octopus washed ashore is a very fascinating project on one side, but on the other, it depicts grief and agony. The entire body of a helpless octopus, especially its tentacles, is trapped in the trash, wrappers, and plastic water bottles. This sculpture of art can easily touch one’s heart and grab the conscience of the human mind.

The artists collected water bottles from the shores of different beaches and transformed them into a very huge water bottle sculpture that captivates the viewer’s attention in the best way possible. These 20-30 foot huge sculptures are installed not in the places accustomed to art but in the most unexpected places where it easily captures the human mind’s conscience.

In this mind-blowing project, the artist has shown the world how marine life is compelled to engulf the pollutants, making oceans polluted. While breathing in such an environment, fish expel the polluted water instead of the normal one. In this sculpture, the whale has shown to be puking out the trash, which conveys a very strong message to the world.

Some artistic minds have devoted their creativity to the heroes, leaders, and activists who are cleaning the world’s oceans from the pollution caused by fellow human beings. The artists have worked so hard to pay tribute to these ocean eco heroes by creating classical portrays of them. Along with paying tribute, these amazing sculptures convey a very positive message to the world.

Oceans are very prone to pollution, and this is not only dangerous for beach-goers but also detrimental to life underwater. The most disturbing thing is that this pollution is caused by none other than humans. So, they need to be educated on this issue, and that is why many artists across the globe are putting their utmost efforts into creating artwork that reaches the human mind’s conscience. We hope that this article is effective in the awareness campaign of the importance and the maintenance of our oceans.