The majority of shark species are ovoviviparous. In basic terminology, this means that, after fertilisation, eggs are formed and hatched inside the mother before live young are born into the surrounding water.

During mating, the male shark inserts the clasper (similar to the mammalian penis) into the female’s oviduct and releases sperm. This sperm then fertilises several of her eggs. At this point, some sharks either lay their eggs (known as oviparity), nourish these young pups off a placenta (called viviparity) or, as is the case with ovoviviparous species, hatch the eggs within the oviduct before giving birth at a much later stage. 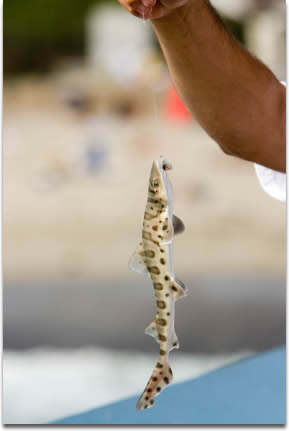 In some shark species, the first pup to hatch will eat the other eggs in the oviduct before they have the opportunity to hatch. This is referred to as intrauterine cannibalism. The Grey Nurse Shark pup will even eat the other embryos of its siblings. This establishes a lifetime of hunting and displays the strong survival instincts present in these beautiful killing machines.

Being ovoviviparous means that the pups are able to develop better and for longer before being born into the ocean, where

they will have to fend for themselves from the moment that they leave their mother’s oviduct. It is also for the pups’ protection that these species most often give birth in sheltered bays or river mouths. These areas are usually free from other sharks and dangerous predators and have more abundantly available food sources than the open ocean.