The shark’s physiology is fascinating as researchers continue to delve into the unique features that enable it to live and hunt as it does. These include physical traits and processes that assist the animal in all spheres of its life without the conscious control of the fish.

Skeleton:
The skeleton is not made of bone but of lighter, more flexible cartilage. Some areas of the skeleton are harder than others for added strength. Other areas, like the snout, are softer in order to allow the shark to absorb blows. Swimming muscles are attached directly to inside of the shark’s body to allow for energy saving and ease of movement. This means that, with no rib cage, a shark will literally be crushed under the weight of its own body if it is not kept in the water. 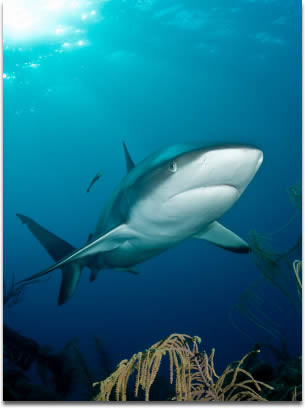 Caribbean Reef Shark cruising over soft corals, with a little remora along for the ride. Digestive Tract:
The shark’s oesophagus is short and wide to allow smaller prey to be swallowed whole or large chunks of prey to be gulped down as sharks do not chew their food. This leads to a u-shaped stomach and, often, to as spiral valve (which is convoluted to increase the surface area for improved absorption). From here, food is excreted via the rectum and cloacae.

Circulatory System:
The heart of a shark is s-shaped. Blood flows from it to the gills to be oxygenated and then through the body to feed muscles and organs. These animals have a relatively low blood pressure, and need to keep blood flowing so that it can be oxygenated. Blood is kept circulating and pumping over the gill slits by the shark’s muscle movements as well as by the opening and closing of its mouth.

Gill slits:
As with other fish species, sharks breathe by means of gills, and not lungs. Water is pumped over the gill slits. Blood in the gill filaments absorbs oxygen from the water being pumped over them, which is then carried to the muscles and organs in the rest of its body. Shark’s gills are not covered. There is a spiracle, which is a modified slit, just behind the eye.

Stomach:
A shark eats only about 5% of its body weight per week. In addition, it can go for weeks with no food at all due to its cold-bloodedness and the resulting slow metabolism.

Buoyancy:
Sharks are kept buoyant by their large livers and their cartilage, which is much lighter than bone. The liver is oily and contains squalene, which assists in keeping the shark from sinking to the ocean floor. The liver is so large that it actually accounts for about 30% of the shark’s total body mass. Their fins and constant movement also assist in keeping them from rolling and sinking.

Thermoregulation:
The body temperature of the shark is at about the same temperature as its surrounding habitat, making most species “cold-blooded”. Some sharks, although being broadly defined as being cold-blooded, have a body temperature that is slightly higher than the water. Examples are Mako and Great Whites sharks.

As one explores the shark’s anatomy, physiology and adaptations in more detail, it becomes clear that this animal has been designed and built to survive the cold depths of its hunting grounds.