Sharks have long been hunted. Various parts of their bodies are used for a number of different products, and these generate a significant income and industry in many places in the world. However, due to the actions of concerned environmentalists, most countries have either banned the hunting of certain species or have implemented stricter controls over the fishing and trade of these fish.

CARTILAGE
Shark cartilage is believed to have many health benefits as it contains certain proteins, sulphur, collagen and calcium. The concept that sharks do not get cancer (which has been proven to be incorrect) has resulted in the creation of medication using this cartilage in connection with avoiding the onset of cancer. As research continues, shark cartilage is being found to possess anti-inflammatory and antioxidant properties. 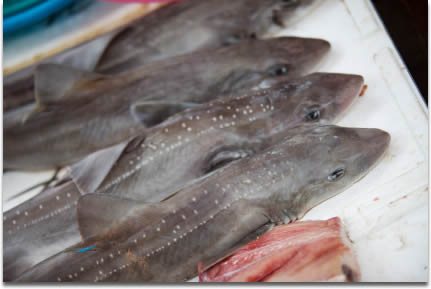 LIVER OIL
The liver of the shark is particularly large in proportion to the size and mass of the entire body. This liver contains oil with a low density, less than that of water. This difference in densities plays a major role in the buoyancy of the shark. However, it also contains alkyglycerols, which boost the number of white blood cells. This is an essential process for people suffering from leukaemia. In addition, it is rich in squalamine and squalene, Vitamin A and Omega-3 fatty acids. As such, it is used to boost the immune system and as a dietary supplement, as well as an aid to healing wounds and preventing colds and flu. In addition, shark liver oil has been used in cosmetics, sun tanning oils, in machines for lubrication and as wood sealer.

SKIN
The skin is used for leather and leather products. Its sleek, flawless appearance and strong nature makes it ideal for use in books, wallets, bags, shoes and so on. These are common tourist purchases in areas where shark fishing is a major industry.

The flexibility and value of these various products puts even common shark species under significant risk. When confronted with nets, spearguns and fleets of fishing vessels, even the most fearsome of fish stands little chance of defence or survival.