The Ragged Tooth Shark is also known as the Sand Tiger Shark or the Grey Nurse Shark. although rather frightening in appearance, this species is relatively placid and docile, only likely to make an attack if cornered or provoked. Because of its somewhat scary look and its slow, passive movements, this is the ideal shark for a manmade aquarium, and can often be seen on display in such facilities all over the world.

The Raggie has a stocky body and reaches a length of just over two metres, with the female being slightly larger than the male. They weigh between 90 and 160 kilograms when mature. The top of the body (the dorsal side) is a grey-bronze colour, while the underneath is a much lighter variation thereof. They also have a rather hunched appearance with a sharp, pointy nose or snout. 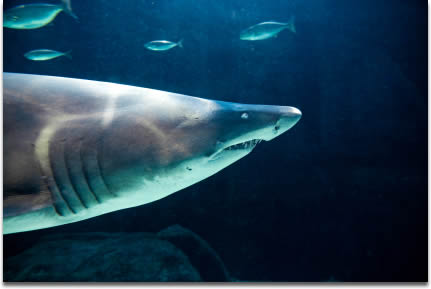 The Raggie is very different from other sharks in terms of its buoyancy. Most species remain buoyant by the large amount of oil in their large liver, which is lower in density than the water around them. However, in the case of Ragged Tooth Sharks, they gulp down and keep air in their stomachs to keep them from rolling over or sinking to the bottom of the ocean.

This species of shark is found in all three of the major oceans (Atlantic, Pacific and Indian) and in the Mediterranean Sea every so often. They prefer the shallower coastlines and reefs, but can actually be found at all depths.

The Raggie is a nocturnal animal and spends the day times hidden in caves and gutters, paying little attention to divers. They make little or no effort or exertion during the day, conserving their energy for their night-time hunting.

Its teeth are like needles, rather than being serrated. These seize the prey, which is then swallowed whole. Favoured meals include bony fish, other sharks, rays, crustaceans and squid.

The Ragged Tooth Shark is ovoviviparous, meaning that eggs are fertilised and hatched inside the mother and that the pups continue to live internally until they are big and strong enough to be born alive. The mother continues to produce unfertilised eggs inside her uterus so that the pups have sustenance while they are yet to be born, essentially making them cannibalistic (this is a process known as oophagy). Only two pups are born (one from each uterus) and they each measure approximately 100 cm at birth.

While considered to be one of the more passive sharks in today’s oceans, the Ragged Tooth Shark has nevertheless been known to make attacks on humans, with a very small percentage of fatalities. This acts as an important reminder of the capabilities of these fish and the respect they command.