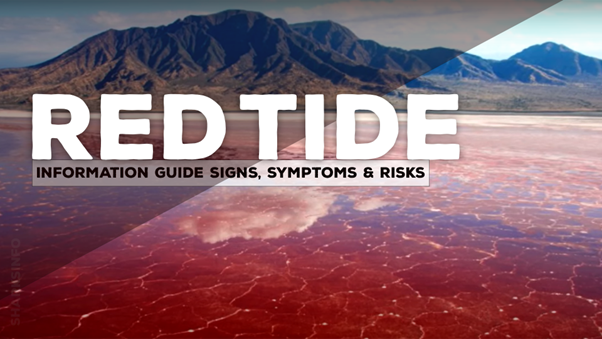 Imagine you are planning a visit to enjoy your holidays to oceans and upon reaching the destination point, you must be imagining crystal clear water, but what you see is a dark brown or reddish color of the water. What that could be? You must be curious. Right? It’s called Red Tide. Have you ever heard about it? The color of the water changes because of the extensive algal growth which not only affects the life living under the water but affects human life as well. Very few people know about the Red Tides, so to provide you with the information, we are explaining everything related to Red Tide. Scroll down!

What Is Red Tide?

As we all know that algae are the photosynthetic organisms that form the base of the marine as well as aquatic food web. Sometimes, algae grow extensively, forming a huge mass called an Algal bloom. The algal blooms appear as the dense coloration of the ocean waters, forming red tides. It is also referred to as a harmful algal bloom, as it releases harmful substances which sicken and kill the life living under the water as well on the land.

How Is Red Tide Formed?

Red tide is an environmental condition where protists, specifically dinoflagellates, and algae go through a rapid period of growth, forming a bloom – the Algal bloom. The algal cell in a period of just 1 or 2 weeks produces millions of daughter cells. This results in changing the color of the water to reddish brown – forming Red tides.

How Long Can A Red Tide Last?

What Are The Common Types Of Toxins Produced By Algal Blooms?

Following are the common type of toxins produced by algal blooms:

What Are The Signs And Symptoms Of Breathing Red Tides Toxins?

The symptoms of breathing red tides toxins depend upon:

The signs of illness are:

What Is The Risk Of Red Tides?

The Red tides have many risks, such as

Where Red Tides Are Most Common?

Some of the regions, where red tides are common are:

Which Countries Are Greatly Affected By Red Tides?

The following countries are affected greatly by algal blooms:

The following are the preventive measures, that should be taken to avoid red tides:

Red tides in ocean waters are caused by excessive algal growth, which forms algal blooms. The red tides affect the life living under the water such as fishes, aquatic mammals, and sea birds, they also affect the human greatly. The consumption of affected seafood causes harmful symptoms in humans such as respiratory disorders, asthma attacks, stomach pain, or food poisoning. However, such symptoms must be avoided by following the guidelines and rules set by local communities.