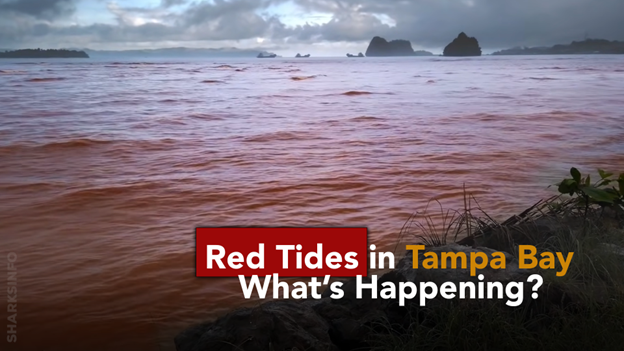 Tampa Bay is one the major seaports on Florida’s west coast that accompanies a diversified industrial life on a very large scale. The population of this area prefers to spend their picnics on the Tampa Bay coast, but due to some recent happenings, it is not a safer place for humans as well as for marine life to survive.

Recently, red tides have been seen in Tampa Bay that can be deadly to some and gruesome to others. It makes the surroundings toxic to survive because it releases some harmful toxins that can interfere with normal life being. Due to this reason, when the severe red tides bloomed on the coastal area of Tampa Bay, more than 600 tons of fish were seen washed ashore after losing their life in a red tide.

What is Red Tide?

Red tide is a harmful algal bloom that is caused by a microscopic organism that belongs to the Algal family. It is to keep in mind that not all algae are harmful or toxic. On the contrary, algae play an important role in the sustenance of the natural ecosystem, and without it, our ecosystem can easily collapse. They are involved in some of the most important symbolic relationships in which both partners benefit each other.

But the algae that cause red tide is not one of them; rather, it is highly toxic for the surroundings and life existing in the ocean. Naturally, it is found in the form of colonies in the deep blue water of the ocean. The algae that are responsible for red tide bloom is specifically Karenia brevis. When the colonies of Karenia brevis grow exponentially, and their concentration in the ocean is higher than normal result in the red tide bloom.

As this gruesome red tide blooms approaches, marine life gets into serious trouble. When the immense number of algal colonies decompose after death, their decaying mechanism substantially reduces the oxygen level of that surrounding area forcing the life around the red tide bloom to either escape from that area or get die.

What is happening in Tampa Bay?

Unfortunately, Tampa Bay has become the victim of red tide blooms. Red tides did not stop killing a huge number of fishes and other forms of oceanic life off Florida’s Gulf coast. According to Florida’s wildlife agencies, this is one of the worst red tide blooms that happened in 50 years. It is because of the time of the year in which it happened. Usually, it happens in the fall season, but this time, red tide blooms approach Tampa Bay in the middle of the summer season.

The duration of the red tides can also be responsible for the severity factor. It can last for a week as well as longer than a year. It can become less violent with the being and can reoccur anytime soon.

What are the possibilities that cause Red Tide?

A number of physical and biological conditions can influence red tide blooms. It can be sunlight, nutrients, and the salinity of the ocean. The speed and direction of winds and recurrent waves can also be responsible for red tide blooms.

Industries that spill their waste products full of nitrogen can stimulate the growth of Karenia brevis. The nutrients and chemicals that run off from the land to the water can also influence red tide. The major possibility can be the high levels of salinity within the ocean because Karenia brevis cannot survive in the lower levels of salinity.

A lot of marine biologists, researchers, and many concerned authorities are working on this severe environmental hazard. According to them, all of these reasons and possibilities can contribute to the red tide bloom, but the actual reason behind it is still unknown.

Tampa Bay has been gravely influenced by the red tide blooms, which are caused by the higher concentration of harmful algae. The main specie responsible for this hazard is Karenia brevis which lives in the form of colonies and increases its population exponentially. At the Tampa Bay coastline, when the salinity of the ocean is enhanced along with some other reasons, Karenia brevis causes red tide blooms that result in the death of a massive number of marine life. The concerned authorities are working on this environmental hazard to protect marine life from the harmful effects of red tides so that they are capable enough to maintain the normal mechanism of the natural ecosystem.