The shark’s closest relatives are skates and rays, of which there are over 600 different species. Other lesser-known relatives are the chimaeras, which are rare in today’s oceans. Collectively, sharks, rays, skates and chimaeras are known as Chondrichthyans. In general, this group is characterised by a cartilaginous skeleton (as opposed to a bony one), jaws, paired fins, scales, paired nares (which assist in breathing) and hearts with two chambers. 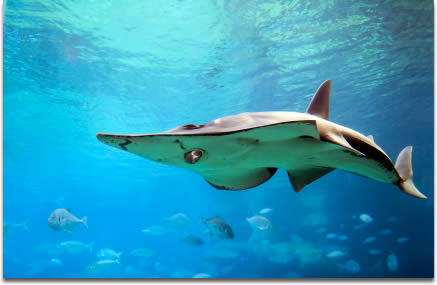 Many people find it difficult to tell skates and rays apart as they both appear flat and somewhat round in appearance as they travel along the ocean bed. SKATES have a stockier tail with no stinger and pelvic fins comprising of two lobes.

Most skates have two dorsal fins and a very small tail or caudal fin. There are enlarged scales resembling thorns that run along the middle of the back and tail, and sometimes along the sides of the skate’s body. Males also displayed larger scales on their wingtips and near the eyes. Skates are usually a dull brown or grey colour, and live in the deeper waters.

RAYS have thin tails with a spine in most species. These spines can either electrocute or sting attackers and prey. Their pelvic fin has only one lobe and there are no thorn-like scales on their bodies. Some species of rays boast stunning, vibrant colours and patterns. They enjoy the warmer waters of shallow areas and are often spotted by snorkelers or even swimmers.

Sharks, rays and skates have placoid scales, otherwise known as dermal denticles. This gives their skin a rough feel when felt in a certain direction, much like sandpaper. In fact, shark skin has been used as sandpaper for this very reason. These denticles reduce turbulence, allowing the shark, ray or skate to move through the water using less effort.

Chondrichthyes all breathe using gills, as opposed to lungs. They have between five and seven pairs of gill slits, while most bony fish have only one pair.

Skates and rays can be found in all of the major oceans of the world;i.e. the Pacific, Atlantic and Indian. They live anywhere between eight metres and 3000 metres below the water’s surface, as well as in areas where rivers flow into the oceans. They use their wing-like structures to propel themselves forward as they glide along the ocean’s floor.

The Manta Ray is the largest known ray. It can weigh up to 1300 kilograms.

Skates produce fertilised eggs in a protective sac, which then hatches a litter after about six to nine months. Rays, on the other hand, give birth to live young (as is the case with human beings). Neither species looks after their young once born or hatched.

Skates and rays are carnivorous hunters, usually feeding off hard-shelled invertebrates that live on the ocean floor.

Chimaeras also live on the ocean floor, approximately 2500 metres down. There are exceptions that favour shallower waters. Their bodies are soft and long and their heads relatively large in proportion. Their skin is smooth and usually brown, grey or black in colour. Chimaeras are equipped with a poisonous spine just in front of their dorsal fin, which they use for self-defence.