Sharks are fish and, like other species of fish, use gills to breathe rather than lungs. There are usually between five and seven gill arches, each bearing one gill slit. In most other fish species, these gills are covered by the operculum, which acts as a lid over the gill. However, sharks do not have this covering. There is also a modified slit, called the spiracle, which lies immediately behind the eye on the shark’s head.

Sharks use these gill slits to oxygenate their blood. The spiracle assists in the process of taking water in. As the shark moves forwards, water is taken into the mouth and over the gills. This is called “ram ventilation”. When at rest, the shark actively pumps water over its gills. There are gill rakers, which are perpendicular to the gill arches. The rakers support the secondary bars, which direct the water. 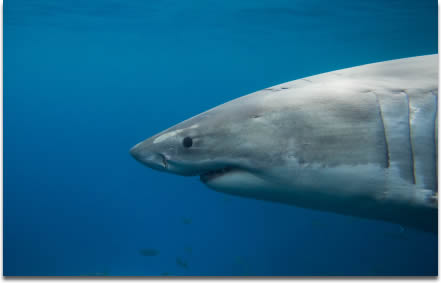 Deoxygenated blood travels to the s-shaped heart, which comprises two chambers. From here, the blood is pumped through the ventral aorta to the afferent brachial arteries. As the blood reaches the gills, it is oxygenated by the water. Then, the blood is transported via the efferent brachial arteries into the dorsal aorta and then on to the rest of the body, including all muscles and organs.

Once deoxygenated, the blood returns through the posterior cardinal veins, into the posterior cardinal sinuses and then on into the heart ventricle. The faster the shark moves through the water, the more efficient this process becomes. This is to prevent tiring during bursts of speed, when it pursues its prey. This accelerated process is known as the “ramjet principle”.

The direction in which the blood flows is always opposite to that of the water. This allows the maximum amount of oxygen to pass from the water to the blood and is called the “counter current flow”.

Sufficient oxygen in the blood is essential for the muscles to be able to move and work as efficiently as possible.

Movement is necessary for breathing as well as buoyancy. Therefore, the condition of the muscles is of utmost importance to the respiration and the very survival of the shark.

The heart is not required to be very large or strong to accomplish this task. Therefore, sharks, especially larger species, are only capable of short bursts of increased activity. They do not have the stamina for continued action.