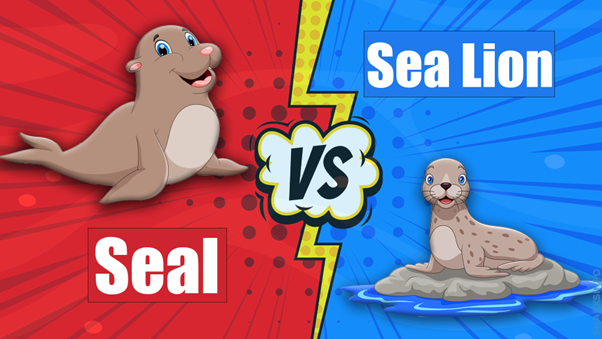 At first glance both- seal and sea lion look kindred; homogeneous but in reality, these two are distinct in anatomies… Let’s mark down some fascinating disparities between these two:

Demarcation Between Seal Vs Sea Lion

Belonging to the same order, Pinnipedia, seal and sea lions are considered identical to each other. But that’s not true, as they do have their fair share of differences that tells them apart. Here are some of the distinctive features…

Steller sea lions are the only sea lions that are large and they consume smaller seals. It is not something that is observed often but it is observed once in a blue moon. As both species are small in size, they avoid preying on eachother but do hunt other sea organisms voraciously.

Seals Vs Sea Lion; Which one is more aggressive?

Seals are more friendly to people; form a nice bond with them and do not attack humans as often as sea lions do. Sea lions are somewhat inimical and are capable of attacking humans as they have an aggressive nature. Some sea lions become friendly as they are kept in zoos and taught to be friendly to animals but sea lions are larger in size as compared to seals and a wild animal is not predictable at all.

Seals vs Sea Lions; Who is Faster?

Seals are better at swimming, so they swim faster and on land, they do not have much to do. Sea lions travel easily on land but swim slower than seals.

There are many differences but, the most prominent is that sea lions have ear flaps- they are called eared seals. Sea lions are larger in body and seals are relatively small. Seals can swim fast and better but on land seals only belly flop. Both are wild animals so humans should stay away from them.