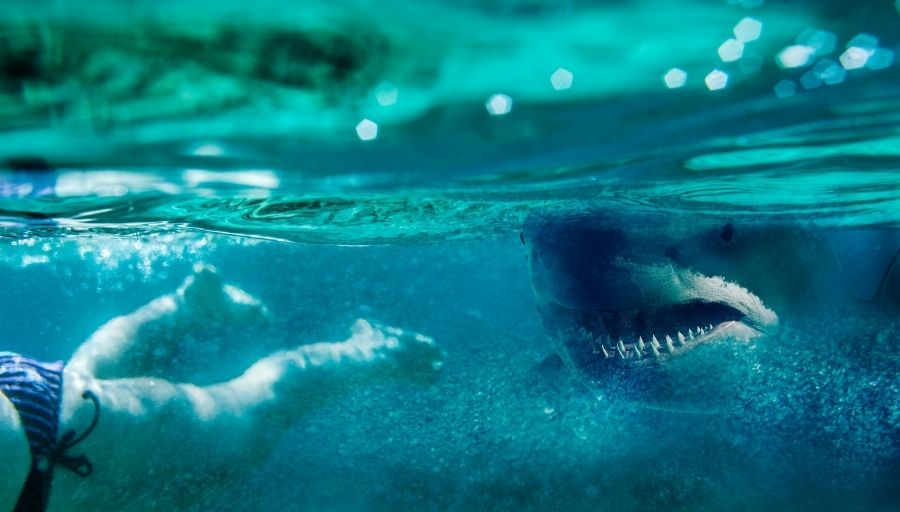 While there are approximately 100 shark attacks on people every year, there are only between five and 10 fatalities. The many survivors tell their stories to educate and inform, as well as to raise awareness of the dangers of not heeding the cautions of the lifeguards or media.

The Story Of How Bruce Survived A Shark Attack

A lifeguard, 6.5 months pregnant, had just returned to Florida from her vacation when she was on duty on Treasure Shores Beach. She swam behind the breakers for a swim parallel to the shore.

She was wearing a black swimsuit, yellow cap, jewellery, goggles, a whistle around her neck and her lifeguard buoy towed behind her. The water was murky with a visibility of only about two feet (60 centimetres).

There was a drop-off of about four to five feet in the area where she entered the water. As she began swimming, she was forcefully bumped and spun around, completely disoriented.

The shark had bitten her hand and leg as it had bumped her, and the water rapidly turned red around her. Her partner could not hear her cries for help, so she was forced to swim ashore alone. The shark did not return once it had tasted her flesh, a common reaction.

She received almost 100 stitches in her leg alone and her wrist required multiple surgeries and bone removal, as well as extensive therapy.

Bruce Grimes is a surfer from the United States of America, 49 years old at the time of his attack in Mexico. After being in the water for some time, Bruce sat on his board for a breather when he felt it being bumped from beneath.

He immediately realised that a shark had taken a liking to him and calmly began to paddle back to shore. The animal bumped him once more and then took a bite, grabbing Grimes’ arm and hand.

Again, after having tasted human flesh, this Bull Shark desisted from further attacks, leaving Bruce to paddle the 500 metres back to the sand alone. After driving himself to the hospital, Bruce Grimes received approximately 100 stitches in his hand.

Bruce had not been aware that, the day before his encounter, another man had been killed on the same beach by a shark. This emphasises the importance of being aware of the water and its conditions before entering it as well as of media warnings.

The Story Of How Todd Endris Survived A Shark Attack

Todd Endris was a 24-year-old surfer in California, taking the waves of Monterey Bay on with a friend, Brian Simpson.

The two had spotted a playful pod of dolphins in the water, delighting in their antics. Endris stopped for a rest, sitting on his board about 75 yards (or about 69 metres) from the shore.

Suddenly, he was violently struck from below and thrown 15 feet in the air, only to land in the water. As he frantically climbed back on his board, the Great White closed its mammoth jaws on him, digging its serrated teeth into his back.

The shark then clamped down on his leg and repeatedly dragged Todd under the water, despite his pounding it on the snout and face with his free leg and fist.

His friend and other surfers around him began panicking and trying to get out of the water, despite Endris’ calls for help. The shark shook him in a violent display of its sheer power.

Then, six dolphins began a defence. They leaped out of the water around Endris, creating whitecaps. They surrounded the victim, slapping their flukes as the water turned red with his blood.

Then, they leaped right over him, creating a spectacle, one which obviously had the desired effect on the Great White, as it soon released Todd’s leg.

The dolphins then positioned themselves between the shark and the surfer. Surrounding surfers seized this opportunity to help Todd back on his board and to shore, where the magnitude of his terrible injuries could be seen.

His spine and organs were exposed and his leg was bleeding badly. Astoundingly, Todd survived despite the shark’s having missed his aorta by only two millimetres, losing half the volume of blood in his body and requiring over 500 stitches and 200 staples.

Todd Endris had been swimming in one of the areas that constitute the Red Triangle, known for its abundance of sharks.

In addition, there are many sea lions and seals in this area; a favourite meal for the Great White Shark. Such an increased population of both predator and prey makes for an increased chance of attack.