There are few experiences more exhilarating than coming face-to-face with nature’s most awesome predators. Impressive in size, graceful in form and unnerving in potential power and killing ability, sharks continue to fascinate researchers and others, young and old.

However, there remain relatively few specimens in captivity today. There are several reasons for this. First, it is difficult to capture a shark due to its strength and resistance. In general, they are large and, when being lured near to boats and people with the use of bait, they are in hunting mode, making them particularly vicious. Once caught, they are then difficult to transport. Sharks are particularly sensitive to electromagnetic signals and the capture team needs to ensure that the vehicle, structures and equipment used for the transportation do not interfere with their receptive signals. 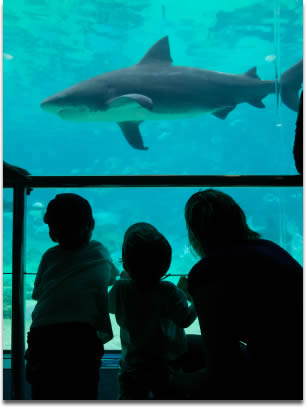 In addition, the shark does not have a hard bony skeletal structure to support their bodies. When out of water, some sharks may actually crush their own organs under the weight of their bodies. This needs to be taken into account during the movement of the animal from the ocean into the tank or stretcher. Once they arrive at the aquarium, there arises the third challenge of providing adequate and appropriate space for the shark to hunt and travel around. Again, there arises the issue of electromagnetic signals, and tanks need to be designed and created by concerned experts.

This is, unfortunately, not the case in many areas of the world, where species are dumped into unsuitable, small and inappropriate tanks, where they do not survive or thrive for very long.

In recent times, responsible aquaria have only homed benthic shark species. These are smaller species that prefer to hunt for small fish and crustaceans along the ocean bed. They do not require much area in which to swim and are easy to feed. Common species include the Hornshark, Leopard Shark and Catshark.

As time passes and knowledge increases, technology is improved and scientists have better means of capture and transportation available to them. There is also a greater understanding of the requirements of specific species and how best to care for them.

When purchasing sharks for private home-based aquaria, it is absolutely essential that the owner knows about the species that they are buying as many pet shops sell oversized animals and are not familiar with the proper care thereof.

The most popular shark amongst visitors to aquaria and similar facilities is undoubtedly the Great White Shark. In addition, it is one of the world’s most prolific sharks, making it a relatively easy specimen to locate.

However, there are several prohibiting factors:

•The animal cannot be restrained or kept motionless for any significant period of time. These sharks are essentially warm-blooded in nature and are, for this reason, susceptible to excessive stress after a battle.
•During transportation to the aquarium, it is vital that the shark be kept in an environment in which it can keep moving.
•Great Whites are not able to make sharp turns. This means that the tank in which they will be kept needs to be large and have minimal to no obstacles.
•Great White Sharks are very sensitive to the electromagnetic fields emitted by metal objects, other animals, human beings, and so on. Therefore, the tank that is to accommodate them needs to be free of such stimuli as rods, unprotected rebars, lighting cables and pump house equipment as this will stimulate the shark’s senses on a constant basis. The animal may even damage such equipment in an effort to find out what it is.