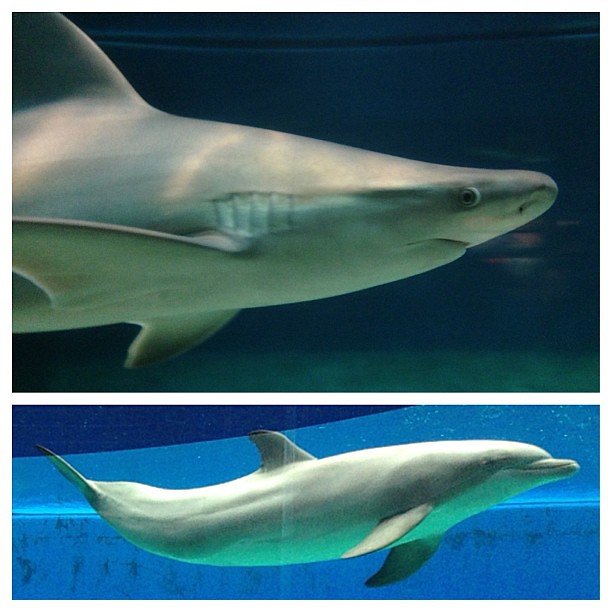 Sharks and dolphins are the beautiful creatures of the aquatic ecosystems. If you have a sight from the surface of water, it is very difficult for you to differentiate between sharks and dolphins because they look quite similar due to their color and shape but if you look closely, you can find a number of differences among them. To get a full knowledge of these ocean species, let’s start by exploring the similarities and major differences between them.

There are many features either internal or external, which differentiate them from each other. Sharks are the type of cartilaginous fishes while dolphins are categorized as mammals that live in water. Both species belong to the same evolutionary period, as they prefer to thrive in the ocean and enjoy swimming at a high speed. Most interestingly, they share the same ancestral history – It was reported that the ancestors of sharks and dolphins appeared more than 290 million years ago on the Earth.

What similarities do sharks and dolphins have?

These species also share some similarities as both are of grayish color, aquatic animals which are characterized as vertebrates because both possess backbone. Both usually tend to live and swim in the ocean and their dietary food includes invertebrates and small fishes. Both possess dorsal fins positioned at the back as well as pectoral fins positioned on the sides.

Do they differ from each other?

Although  sharks and dolphins have many physical characteristics that are similar to both of them, sometimes it makes it difficult for people to choose whether it could be a shark or a dolphin? But to know a bit of detail about their distinctive features will help you to differentiate between them. let’ find out what characters make them different from each other.

Sharks and dolphins share many common features and share the same evolutionary history but they differ from each other in many ways as well. The information provided in the above article might be enough to differentiate between sharks and dolphins. So whenever you see a giant gray coloured species in the water, don’t panic, use your knowledge to recognize whether it is a shark or a dolphin.