The Tiger Shark remains one of man’s largest threats when it comes to shark attacks in the ocean, second only to the Great White. This species averages a length of between 3.25 and 4.25 metres, although specimens of over five metres have been spotted. The average sized Tiger will usually weigh anywhere between 385 and 635 kilograms.

This mainly nocturnal hunter prefers fatty meals such as sea lions, smaller sharks, seals, squid, dolphins and turtles. However, it is frequently seen snatching birds and will even consume inanimate objects (such as metals and plastics) that are found in its habitat.

The Tiger Shark prefers sub-tropical and tropical waters and usually sticks close to the shore or in estuaries and harbours as it favours shallow environments, even those that appear too shallow for an animal of this size. Because of this preference, it is more likely to encounter humans than those species that opt for the open ocean rather than venturing closer towards the land. During winter, the Tiger Shark will stick close to the equator and the warm waters surrounding it and is nomadic for the remainder of the year, following the warm currents through the earth’s oceans. The Tiger Shark is so named for the dark stripes on its back, or dorsal side.These stripes usually fade with time. 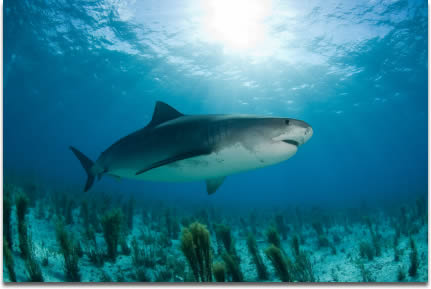 The dorsal fin is situated further down its body than most sharks. The underside, or ventral side, is white or a light yellow hue, making it difficult to spot from below, while the dorsal side is a dark grey or bluish colour.

The wedge-shaped head and long fins and tail enable quick movements from side to side and instant bursts of speed. This species is able to reach approximately 32 kilometres per hour when in pursuit of prey. Because of its varied and indiscriminate diet, the shark’s teeth are designed to be able to tear even tough substances like turtle shells, bone and flesh.

Females only mate once every three years to allow their pups to develop and to regain strength and energy after each gestation period. The Tiger Shark is ovoviviparous. This means that eggs are fertilised by the male inside the female’s body, or oviduct (uterus). These eggs are nourished by egg yolk as well as by the nutrients within the oviduct. After some time, the eggs hatch inside the mother and the hatchlings continue to live there, feeding off remaining egg yolk, until they are strong and developed enough to look after themselves. Once this stage is reached, the pups are born live into the ocean, at which time they immediately leave their mother, who is likely to view them as easy prey, and live a life of independence. Gestation can last up to about 16 months and litters comprise of between 10 and 80 pups. More research is required to determine the average lifespan of a Tiger Shark.

Because the Tiger Shark has made several attacks on human beings and because of the value of its fins and liver, it has faced mass killings at the hands of man. In addition, its reproductive cycle is slow, and numbers are not quickly regained once they drop. For these reasons, they are listed as “Near Threatened” and need to be preserved and protected for their value in the marine ecosystem.