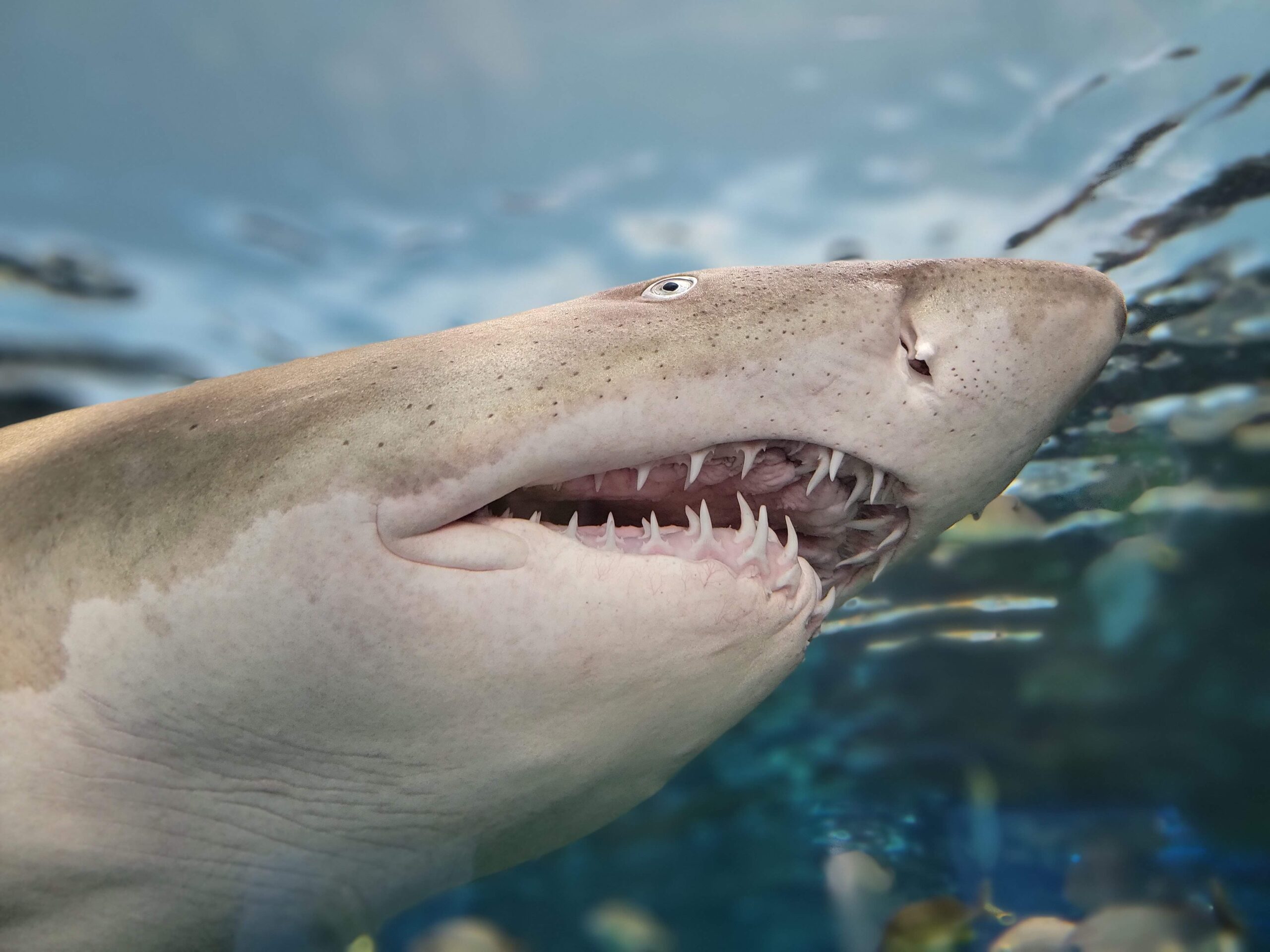 Sharks are titled the top predatory animal of the aquatic and marine food web because they are blessed with exceptionally powerful jaws. Sharks have many teeth arranged in multiple rows in the jaws. They are also capable of moving their jaws back and forth while feeding and hunting. They have more than 30,000 teeth in their lifetime because they can lose and grow their teeth. Depending upon the type of species and feeding habitat, sharks have various kinds of teeth! Read on to find out more about the shark’s teeth.

In general, sharks have pointed, serrated, and sharp razor-like teeth which allow sharks to grab the prey and tear it up. Depending upon the shape of sharks’ teeth, we have enlisted some sharks with their unique form of teeth:

Thresher Shark: These shark species have small rows of teeth that have very deep and curved roots, the teeth have no serration.

Sand Tiger Shark: The Tiger shark has a unique shape of teeth – they have small curved cusplets, and long crown-like teeth with pointed roots and lobes.

The Gray Sharks: The sharks have a small set of teeth, with serration, the lower teeth are more pointed than the upper ones.

The Megatooth Shark: They have a large and robust set of teeth with fine serrations.

Snaggletooth Shark: The sharks have a unique shape of teeth; they have very sharp serrations and the roots of the teeth make a shape of “Z”.

What Type of Teeth Do Sharks Have?

Well, depending upon the feeding habitat, sharks have 4 basic types of teeth which are listed below:

Some shark species such as Angel Sharks and Nurse Sharks have dense flattened teeth which are meant for crushing food including crustaceans, shrimps, and bivalves. These species are mostly bottom dwellers because much foodstuff is available on the seafloor for them.

Sharks such as Bull sharks and blue sharks have needle-like teeth which help them to catch prey including fish and other sharks. Moreover, the teeth allow the sharks to feed on stingrays, flounder, and squids as well.

The most fascinating species of shark – the Great White shark has triangular upper teeth and pointed lower teeth embedded in the jaws. The teeth help the giant creature grab and crush large fishes and mammals. The teeth are serrated with pointed edges which cut the prey into small bites that a shark can easily swallow.

Some species of sharks such as Basking sharks and Whale sharks have nonfunctional sets of teeth. These sharks are filter feeds that mostly eat plankton, so they do not need specialized teeth to feed on.

Sharks’ teeth are as extraordinary as they are! Depending upon the type of species and feeding habitat, sharks have different sets of teeth. In general, they have pointed, serrated, and razor-like sharp teeth which help them to catch and crush the prey in small bites. Moreover, they have four specialized sets of teeth that are species specific. One of the best traits sharks have been to lose old teeth and replace them with new ones. That’s all about sharks’ teeth, we hope that by reading this article, you will understand the sharks’ teeth anatomy more clearly!