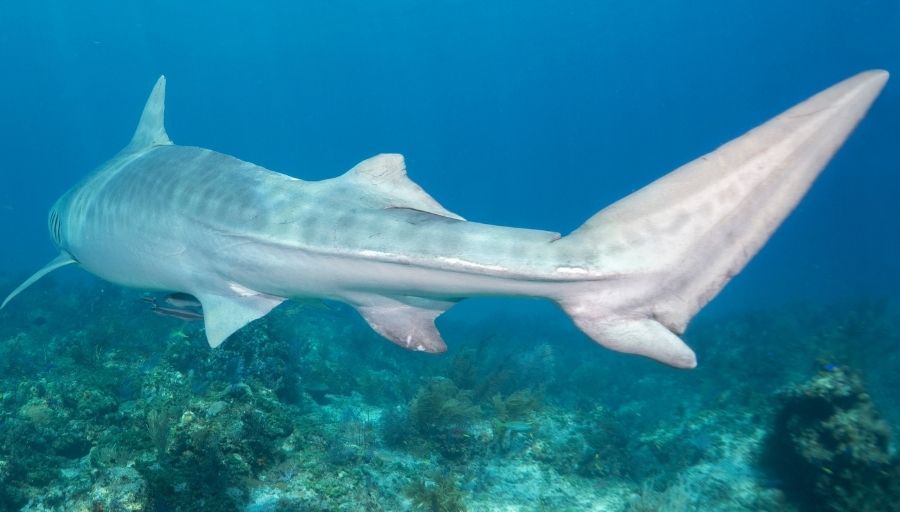 This heterocercal tail is especially adapted for gliding through the water at considerable speeds and propelling the animal forward. It is different in shape and size for each species of shark.

Depending on where the shark lives, what it eats, how it hunts and its body size and strength, the heterocercal caudal fin has adapted to suit its unique needs.

As with every other feature of the shark’s anatomy, this fish is perfectly designed to live, hunt and travel in the watery depths of the world’s oceans. It is with admiration and fascination that they continue to be scrutinised by scientists and biologists the world over.

What Is A Heterocercal Tail?

The tail of a shark is a heterocercal fin. This means that one lobe is larger than the other and is an extension of the vertebral column. In the case of sharks, the top lobe is the larger one.

The fact that the vertebral column extends into this portion of the tail means that there is a far larger surface area onto which the all-important muscles may attach themselves.

This aids in effective thrust andpower when swimming and pursuing prey.

Most bony fish have a Homocercal Fin, which does not have the inclusion of the vertebral column, but extends beyond it unsupported.

How Heterocercal Tails Are Used For Hunting

Heterocercal tails are especially modified to handle and enable these different uses. In fact, the Thresher Shark, which feeds on fish and squid, uses its tail to herd its prey together and stun it into inactivity. This makes feeding on the disoriented animals far easier.

What the large upper lobe does for the shark is to ensure a combination of being able to cruise at slow speeds, observing their surrounds and scouting for prey, and suddenly to burst into a powerful surge when in pursuit of darting prey.

Some sharks need to hunt in shallow waters, and some in deeper, darker waters. Some need to hunt for the same types of prey, while others have a more varied diet and, therefore, a different set of hunting requirements.

Unfortunately, shark tail soup is a delicacy in many places, particularly in the East. This has meant the slaughter of many animals, whether directly or as a result of letting it die after cutting its Caudal Fin off. This has had major implications on the population numbers of sharks of many species.