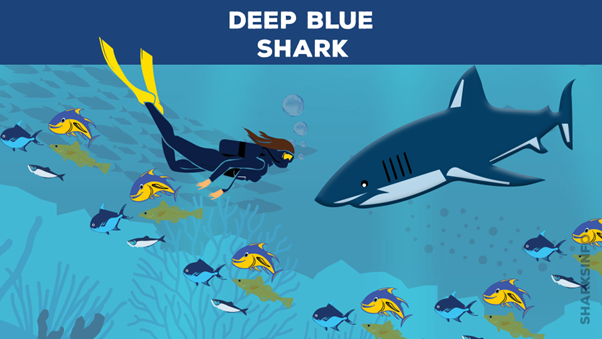 Great White sharks are the biggest predatory species of sharks that are known for their speed and fearsome nature. The warm-blooded species are living in the oceans for about 11 million years ago. The White sharks can reach a maximum length of 12 feet and weigh about 5,000 pounds. The question here is which white shark is the biggest one. Let’s find out about the mysterious sharks which are known to be the biggest Great White Shark species.

What Is The Biggest Great White Shark?

Among the White shark species, is the female Great white shark named Deep Blue is the biggest member of the family of White sharks. The Great White Shark was sighted for the first time in the open waters of Oahu, Hawaii for the first time. The Deep Blue shark is a non-aggressive, calm, and very peaceful species of shark that do not attack humans until or unless provoked.

What Is The Average Size Of Deep Blue Shark?

When The First Deep Blue Shark Were Discovered?

The Deep Blue shark was first discovered in 2014.

In 2014, after a long period, the sharks came into the limelight when a marine biologist, Mauricio Hoyos Padilla, and his team discovered a Deep Blue shark swimming near their boat. In 2014, this shark was filmed for Shark Week near Guadalupe Island, along the coast of Mexico. In 2015, the popularity of sharks increase when the video of a Blue shark went viral while scavenging the carcasses of Whale sharks for food. Interestingly only a single species of shark has been spotted till today.

How Is A Deep Blue Shark Different From The Other White Sharks?

The researchers identified this species by its size as well as by its coloration. The Blue shark has unique pigmented marks with a large laceration on the right side of its body. It has large razor-like sharp teeth which give it a fearsome appearance. The large fins help the shark swim swiftly and with agility throughout the extended oceans. When the Blue shark gets pregnant, it prefers to live near the bottom of the ocean and visit shorelines when it has to give birth to young pups.

Are Deep Blue Sharks Poses Any Danger To Humans?

No, it does not pose any danger to humans because the shark is famous for its calmness and non-aggressive nature. The Deep Blue shark even allows the diver to swim freely in its vicinity. There are no cases of shark attacks on humans have been recorded until now. Further, she allows the divers or swimmers to touch her large fins or skin. But if you provoke it then you will be risking your life.

Among the White sharks, the largest female White shark was spotted in the warm waters of Oahu, Hawaii that reaches a maximum length of 20 feet. The incredible White sharks are named Deep Blue sharks because of their unique coloration and pigmentation. The shark was first spotted in 2014 when it was roaming near the boat of a Marine Biologist. Further, it does not pose any danger to humans because the shark is famous for its calmness and non-aggressive nature.  If you want to know more about the Deep Blue shark, then why don’t you take a deep swim with them?