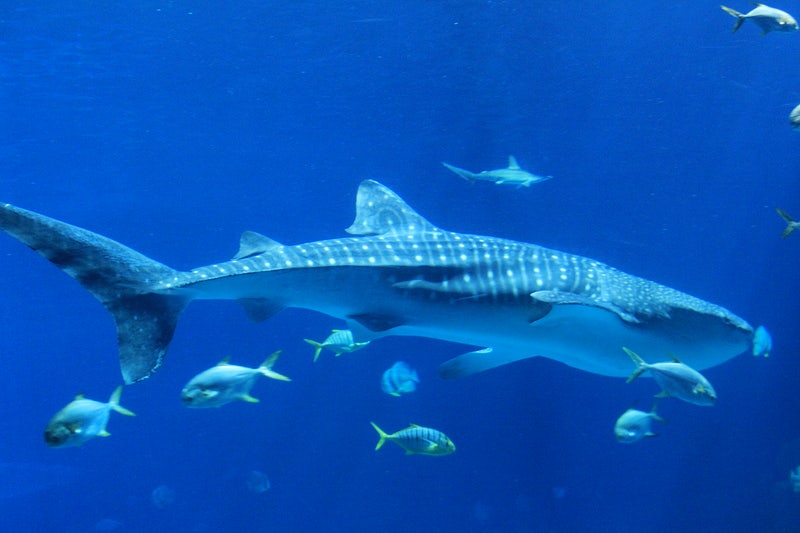 There is no denying that sharks are among the most amazing creatures in the world, so much so that all of their characteristics and features are strikingly incredible. For example, look at how big the sharks are in terms of body length. You will find shark species as large as larger than the school bus and as small as smaller than your hand.

Sharks come in all different sizes and shapes, but it always makes us wonder what the biggest shark ever to be caught is. Is it the whale shark, the largest existing species today, or some other species? Well, we need to find it.

Luckily, you won’t have to do the research as we have done it already, and what we have found out is going to be discussed in this article. So, stick with us as we are about to let you know what the biggest shark ever to be caught is.

Before we move forward, remember that sharks have been dwelling in the world’s oceans for centuries, dating back to about 450 million years. As one of the few animals to have survived mass extinction events, sharks are older than trees and even dinosaurs. Check out where did first shark appear.

Knowing that, it’s going to be pretty interesting to find out which shark species is the biggest ever to be found.

The biggest shark ever to be caught

At this time, researchers have explored over 500 species of sharks, and yet it is believed that there are so many left in the deep oceans waiting to be identified. With that said, the whale shark, which is also one of the filter-feeding sharks, is believed to be the largest living creature today, with an approximate size of about 57-60 feet.

However, when you look at the biggest species ever to be caught, there is one other species of shark that crosses the size of a whale shark. The species is known as the Megalodon.

The Megalodon wasn’t just the biggest shark in the world; it was also the largest fish to exist ever. Approximately 20 million years ago, Megalodon fossils were discovered. It was 3.6 million years ago when the giant shark finally went extinct after dominating the oceans for about 13 million years. Yet, it remains in the spotlight due to its enormous size.

A tooth fossil indicates that Megalodons may have grown up to 80 feet in length, but the exact size remains disputed within the scientific community.

With its large serrated teeth, Megalodon was a top carnivore in its marine environment. With whales and large fish as prey, it probably also ate other sharks.

So, now you know the biggest shark ever to be caught, but unfortunately, it doesn’t exist anymore. Why not check out the other biggest sharks in the world? Read on to find out a few names.

Biggest sharks in the world

Giant sharks have evolved and gone extinct throughout history; however, there are many giant-sized species that exist today. As mentioned earlier, the whale shark is said to be the biggest species living today. Nevertheless, there are so many other species that come in the category of biggest sharks in the world.

As the name depicts, this species of shark has a giant size mouth, but you might be surprised to know that it is one of the filter-feeding sharks. In lieu of hunting larger prey, megamouth feeds almost exclusively on tiny shrimplike crustaceans and plankton. Talking about their size, they can grow up to 18 feet in length when fully grown.

Greenland sharks are typically 8-14 feet long, but the largest one has been reported to be 24 feet long. Greenland sharks feed mostly on fish and marine mammals, such as seals, but they are generalist feeders and consume a wide variety of available foods. Since it inhabits the cold depths of the Arctic and North Atlantic, where humans aren’t active, this species isn’t known to pose a threat to humans.

Do you know among vertebrate species, the Greenland shark is acknowledged to have the longest life expectancy? Find out how long do Greenland sharks live.

Probably one of the sharks that we all are familiar with in one way or another due to the fact that it is among the most dangerous shark species out there in the waters. When it comes to their size, it is believed to be the largest non-filter feeder shark species, with an approximate length reaching 20 feet long.

In the early days of their growth, great white sharks hunt fish and other smaller prey, and as they grow, great white prey on large mammals, including sea lions and dolphins. All oceans around the world are home to the large, aggressive great white – notable for its size and aggressive behavior.

We all have been in situations where we might have imagined a shark as large as we can, but now you know about the biggest shark on record. With a size reaching up to 80 feet, the Megalodon is said to be the biggest shark ever to be caught.