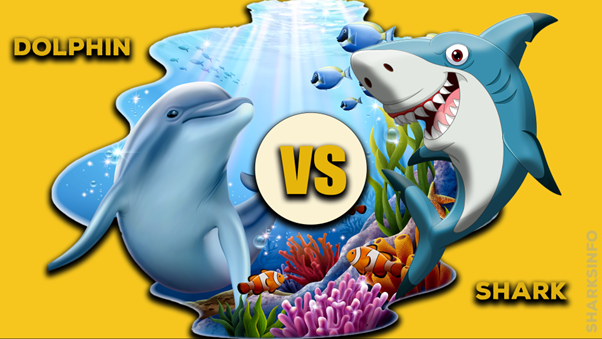 There are multitudinous aquatic animals present in the oceans. Some of the animals are captivating for being famous for their peculiar physical attributes. Dolphins are proven to be friendly animals and they share a warm and adorable bond with humans whereas sharks are said to be dangerous, and humans are not comfy interacting with or even going close to life-threatening sharks. Both the sea life animals have discernible differences…

Apparent Difference Between Dolphin And A Shark

Both are sea life animals and somehow look the same at first glance, but they have divergent attributes in them…

Some Fascinating Similarities And Differences

As fish, sharks have gills, breathe underwater, and have cold-blooded bodies. Dolphins, on the other hand, are mammals, similar to humans in that they breathe air, have warm blood, and nurse their young. Being highly sociable creatures, dolphins travel, dwell, and hunt in pods.

They are also quite vocal and rely on sound for both communication and navigation. Sharks, on the other hand, are not warm and friendly as they do not move in groups and tend to live alone and are not extremely gregarious. The obvious distinction is that, as was already established, dolphins have blowholes, whereas sharks have gills. Dolphins’ fins are horizontal- it has horizontal fins that move in a different motion than that of the sharks; it moves up and down, but sharks’ movement of fins is different; it has vertical fins that move side to side.

Both marine animals are a little grayish in color so at first glance one may confuse a little but everything about these two animals is different. Sharks mostly are alone and not friendly to humans and as well to its marine life animals it also travels alone; whereas dolphins travel in a group and even hunt in a group. They are friendly to humans, especially to women who are expecting- it forms an adorable bond with humans.