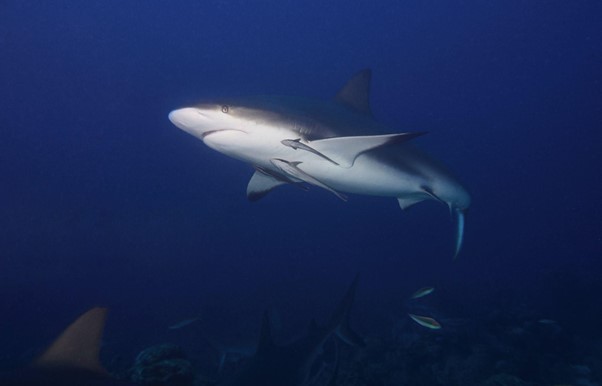 There are many creatures in the ocean which strike fear in humans, among all the top of the list is White sharks – also known as The Great White sharks! Their giant size and efficiency as a predator are the key elements of this terrorising fear. The Great White sharks rarely attack humans but the attack could be extremely fatal and lead to the death of a person.

To know more about them, it’s good to find out what habitat they share and where they live! Take a deep breath – we are going to meet one of the scary creatures of the shark kingdom!

You can find them in almost all the oceans of the world! The Great White sharks being warm blooded animals prefer to live in the temperate coastal waters or sometimes in tropical waters as well. They love to swim in the salty water of the coastlines rather than freshwater. The temperature range between 54o to 75o F is suitable for these species of sharks, they avoid living in the extremely hot and cold waters of the Southern and Northern poles.

You can spot them either near the surface of the shoreline or deep towards the bottom of the ocean but they are not seen swimming in the middle of the ocean waters. These legendary species of sharks show migratory behaviour often because they have no trouble travelling long distances as they can swim at the speed of 35 minute per hour. The Great White sharks also favour those parts of the ocean where there are a lot of fishes, crabs, crustaceans to find their food easily.

Where do Great White sharks live?

The Great White sharks had a wide geographical distribution, around the globe there are found in the Southern coast of South Africa, Eastern, Western and Southern coast of Australia, New Zealand, California, Mexico, Japan, North – East regions of USA, Pacific coastline and the Central region of Chile and Tyrrhenian Sea and Hawaiian Island.

Among all, the highest population of Great White sharks are found in the coastal regions of South Africa – Dyer Island. The Dyer Island is called as a shark’s passageway because the area provides them with a high source of food – about 60,000 seals live in this Island! It Looks like a food street!

Moving on, we have shortlisted some of the places in the world where you will definitely encounter The Great White sharks! Here we go!

1: The Farallon Island near the Coast of San Francisco: The Island is rich in the population of sea lions and elephant seals attract the White sharks to dine in! Food paradise!

2: Dyer Island near Gansbaai – South Africa: There are reports of hundreds of Great White sharks living in this Island – around 532 species of White sharks are spotted! The Island is occupied with an enormous number of seals and penguins, thus offering buffet to White sharks!

3: Cape cod – Massachusetts: According to recent data, the population of Great White sharks have been increasing in the area, the growing grey seal attracts White sharks specially the baby White sharks!

4: The Neptune Islands – Australia: The large population of fur seals fascinates the White sharks the most! The Island is bursting with the activity of shark’s species because of divine food items!

5: The island of Guadalupe in Baja – California: The Island is one of the famous places for tourism and to watch The Great White sharks under the water.

6: Monterey Bay – California: It has been reported in the past 2 years, the area has become a new hometown of the Great White sharks. During the late summer and early fall the population of White sharks increased in the Bay – about 60 White sharks have been spotted till now in the area!

7: Stewart Island – New Zealand: The Island came into limelight because it has been reported that the area is a home of extremely aggressive species of White sharks! Be careful!

8: San Diego – Southern California: The place is common for White sharks because the young babies of sharks visit the area to hang out mostly in the spring season!

9: False Bay – South Africa: The False Bay is famous because you can see fly White sharks fly! Flying sharks – Really? The unique species of sharks breach out of the ocean to grab the prey! Doesn’t mean like a bird!

10: New South Wales – Australia: The area is a home of young White sharks, the pups gather here and feed together and move back to their localities! Partying!

All over the globe the species of The Great White sharks are found everywhere and in almost all the oceans. They prefer to live in warm and saline waters rather than freshwater. The species mostly avoids very hot and cold water bodies, a temperature range between 54o to 75o F is most suitable for them. Despite their extreme distribution, the species are listed as vulnerable by IUCN and might become endangered due to human activities. Conservational programs are obligatory to save these magnificent creatures of the ocean!