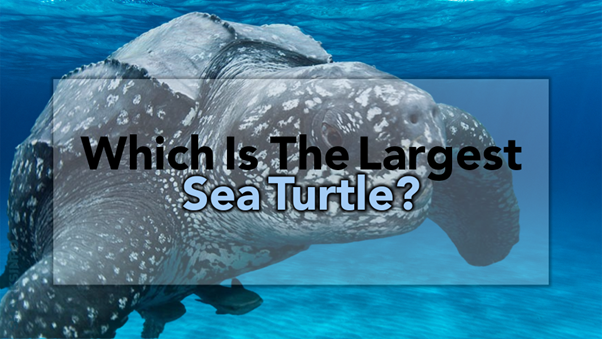 Sea turtles commonly called marine turtles belong to the phylum Chordata. All over the globe, there are only 7 species of sea turtles recorded to date. Out of which 6 have been considered endangered or threatened species. Sea turtles differ from each other based on their size as well as appearance. Scroll down!

What Is The Largest Sea Turtle?

Yes! The Leatherback Sea turtle is the largest member of the sea turtle family living on Earth. On average, they have a length of 4 to 6 feet and weigh around 600 to 1,100 pounds but the largest specimen ever recorded can measure a length of 6.5 feet or 2 meters and are about 2,000 pounds or 900 kg heavy. They are the only living species of the sea turtle family and differs from other members based on their leathery bony shell.

The Leatherbacks Sea turtle has been widely distributed all over the globe. They are commonly found in the coastal waters of the Atlantic, Pacific, and Indian Oceans, Alaska, New Zealand, Norway, and South Africa, and some are spotted in the Arctic region as well.

What Is The Physical Description Of The Leatherbacks Sea Turtle?

The Leatherbacks Sea turtle has a dark greyish to black colored carapace with small white spots distributed all over the shell. They have large and elongated carapaces with 7 distinct ridges running all over the shell. The carapace does not have scales, giving it a leathery appearance. They have tough, thin, and rubbery skin which is strengthened by thousands of small bony plates. The head is large, consisting of a deep notch upper jaw having 2 cusps, allowing them to grab the prey.

What Is The Feeding Habitat Of Leatherbacks Sea Turtles?

Leatherbacks Sea turtles are very selective when it comes to feeding, they are more likely to feed on soft-bodied prey, such as:

For the last 2 decades, the population of Leatherbacks Sea turtles is declining rapidly. This is because human activities like eggs have been taken from the nest by humans for consumption. Moreover, they become victims of fishing nets, gillnets, and longlines and may get injured severely by boats.

Another survival threat they have to face is the indigestion of the plastics such as balloons or bags which they mistakenly assume their favorite prey – jellyfish. The analysis of the stomach content of some Leatherbacks Sea turtle shows that they have consumed 11 pounds of plastic, which block the digestive tract and lead to the death of the species.

All over the globe, only species of sea turtles have been recorded to date, out of which 6 have been listed as endangered or threatened but the only species still living in the ocean water is the Leatherbacks Sea turtle. It is the largest member of the family which reaches a length of 4 to 6 feet and weighs around 600 to 1,100 pounds but the largest specimen ever recorded can measure a length of 6.5 feet or 2 meters and is about 2,000 pounds or 900 kg heavy. They have soft carapaces which make them susceptible to humans as well as other predatory animals – leading to the rapid decline in their population.