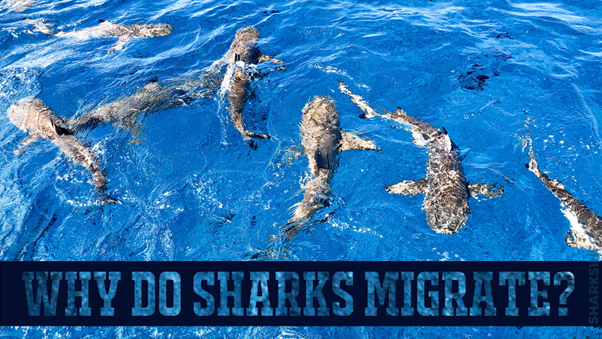 All the living creatures living on the land such as mammals, birds, and insects exhibit migratory behavior for various purposes such as in search of food, for mating, or may be due to climate changes. The same is the case with life living under fascinating water. We are going to focus in this article on the migratory response of one of the most fearsome but remarkable creatures of the ocean waters – the Shark. Do they migrate? What factors make them do so? These are the most asked questions, especially by shark lovers. Let’s scroll down to reveal the reason behind the migration of sharks.

The answer is “Yes”, sharks travel from one area to the other for many reasons. They can travel long distances even miles between deep and shallow waters. Moreover, based on their migratory behavior, the shark’s realm falls under two categories such as local sharks that can travel to a maximum distance of 100 miles and migratory sharks that travel up to 2,500 miles or even more.

Why Do Sharks Migrate?

Commonly, each living animal can exhibit migratory behavior because of certain reasons which allow them to do so. Sharks in the same way also migrate from one locality to another due to the following 4 common reasons that are observed:

Not all but some species of sharks show migratory behavior to find their mate. The behavior of sharks was mostly observed in the Sandbar sharks which travel long distances especially during the breeding season for mating and giving birth to the young pups. The Sandbar sharks during the summer season probably in June or September migrate towards the Northern Coast of Florida where bays and estuaries are their main pupping grounds and move towards the South coast as the winter approaches.

Food as we all know is the basic necessity for survival and is the primary cause of the migration of sharks. The movement of sea life such as small fishes, squids, sea urchins, and marine mammals allows the sharks to migrate to grab their food. For instance, the Great White shark travels toward Eastern Pacific Oceans in summer because the food is abundantly available there and as the spring arrives, the shark moves back to the coast of California.

Another factor that is responsible for the migration of sharks is climate change. Most species of sharks are cold-blooded and live in the warm tropical waters of the ocean as they cannot live in cold waters. As the climate changes, the temperature of the water changes as well which forces the sharks to move to other localities and when the temperature of the water becomes favorable they move back to their native habitat.

One of the most important factors which force the sharks to move to other localities is the loss of habitat. Various factors such as pollution due to industrial waste, chemicals, global warming, temperature fluctuation, and most importantly human activities destroy the habitat and thus sharks travel long distances to search for new habitat.

Sharks are the most important and remarkable creatures living under the water. They continue to swim and can even travel long distances for many reasons such as for food, reproduction, change in climatic conditions seasonally, and the loss of habitat due to various factors. All these elements allow the sharks to exhibit migratory behavior and find a new place for them. Further, the migration from their native habitat may cause the disappearance of sharks from ocean waters.