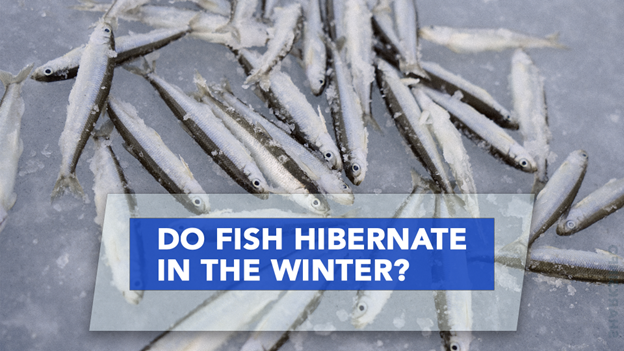 Winter is often a tricky period of time for many species around the world. The temperatures go down, the food sources deplete gradually, and the atmosphere, in a lot of areas around the world, becomes extremely difficult to survive in. Fish go through similar things when it is winter. Ponds become inactive, and other water bodies also slow down in the winter.

The way that a lot of species around the world deal with the months of winter is long hibernation. Hibernation is the process by which many species, because of the extreme temperature, reduce their metabolic activity to conserve energy. They may even go into quasi-coma or hyper-sleep to conserve their energy. Do fish do the same? Let’s catch out.

How Do Fish survive the winter?

The state that fish go through in winter is similar to hibernating. They slow down their metabolism and rest their bodies in the winter, but it isn’t exactly hibernating. Because fish are cold-blooded, they do not necessarily do good in colder environments. However, they can and definitely do adjust to the weather.

People who have ponds often get worried when they see no activity going on in the ponds in the winter. However, the fish, in reality, may just be resting as a result of the cold temperatures. For the reason that their body temperature is synchronized by the environment, it decreases drastically in winter. Because metabolism is directly related to body temperature, their metabolism slows as well.

As a result of the metabolism slowing down, the caloric intake of the fish also decreases to a very minimal amount. This process goes on throughout the winter, and it helps fish survive the harsh temperatures. In short, everything slows down, from their caloric intake to their activity levels which is different from hibernating in the winter.

This “resting state” of fish affects a lot of their bodily functions. Their heart rate slows down drastically, they have a much lesser need for oxygen and food, and their mobility is also slowed down. Sometimes, because of the extreme temperatures, a layer of ice may form on the surface of the water bodies. This helps insulate the water body and gives the fish a nice resting place.

As mentioned above, this state has a lot of similarities to hibernation that a lot of other animals do, but it is actually quite different. The correct term for this is “torpor.” Torpor is the process through which living beings rest in their natural habitats. Torpor leaves fish nearly motionless and seemingly dead.

Because of this reason, fishing is actually a lot more difficult in the winter. Fish may not be tempted as much to get bait from fishermen. They choose to devote as little energy as possible during this torpor stage. This is the situation with the majority of fish species, though, unlike Koi and Gobies.

Koi fish and Gobi fish survive in a little different way in winter than other fish. They go into a state of quasi-hibernation, which is a lot more similar to hibernation than torpor. But still, quasi-hibernation cannot count as full-on hibernation. This is because, for the most part, fish are not supposed to hibernate. It’s not a part of their biological makeup.

Hibernation and torpor can be compared in the way we can compare deep sleep and quick light sleep. True hibernation means that an animal who is in hibernation is not bothered by things such as loud noises or being touched. It is also inevitable and a part of their biological makeup and is triggered by environmental changes. Heart rate slows down by 98% while their metabolism slows down by 99%.

Torpor, on the other hand, is less “severe.” It can be called more like a state of lethargy where the living organism decides to conserve as much energy as possible by slowing down its bodily functions. Torpor can actually be disturbed as well. It’s biologically impossible for a fish to truly “hibernate” because they are not endotherms (most of them).

Pond fish require much lesser food when they are in the torpor state, but they definitely do require some quantity of food. This is because the metabolism does not slow as much as it does in the state of hibernation. So, fish still need some fish to keep their bodily functions going on.

As we have seen in this article, most fish are ectotherms. It is physically and biologically impossible for them to hibernate during the winter because their bodily functions do not run like those of endotherms do. Fish can and do, however, go into the torpor state, which can be defined as a much lighter form of hibernation and better defined as a state of lethargy.