Like human beings and many other animals, sharks have the senses of smell, sight, hearing, taste and touch. However, their sensory organs are specifically adapted to their underwater habitat. They also have some additional abilities, suited to their hunting and living habits.

Smell – Sharks have a very well-developed sense of smell. It has long been known that they can smell traces of blood from kilometres away. In fact, a shark can smell one millilitre of blood in one million millilitres (or one thousand litres) of water. The olfactory senses are in the short duct between the top and bottom nasal openings, or nostrils, which are on the underside of the nose or snout. The nostrils are used only for smelling, not for breathing. Some sharks have barbels, which are projections near the nostrils that act as whiskers, or feelers. 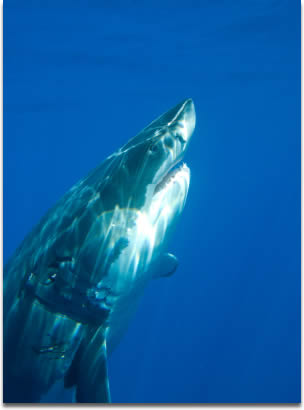 Great White Shark Rising – Guadalupe Island Sight – The shark’s eyes are especially adapted to its murky, dark habitat. Unlike most other fish, the shark is

able to dilate and contract its pupil to allow different amounts of light in, creating a clearer picture. Depending on their needs, some sharks’ sight is more keenly developed for night vision than others. Interestingly, sharks can see in colour. However, they are more sensitive to changes in light than to different colours.

Hearing – It is thought that sharks may have a very well developed sense of hearing. Their ears comprise of a small hole on the sides of their head that leads directly to the inner ear. The lateral line is also a sound-detector and is linked to the environment via lateral line pores. However, rather than detecting noise, it detects

vibrations (thus also playing a part in the animal’s sense of touch). Together, these sensory organs enhance the shark’s hearing sense. They are particularly good at hearing low-frequency noises and at finding out from where a noise is coming.

Taste – Unlike humans, the taste buds of the shark are situated throughout its mouth, as opposed to on its tongue.

Touch – Sharks use electroreception to sense where prey is and where dangers lie. This is achieved by means of electromagnetic field receptors called the Ampullae of Lorenzini. The shark is known for having the highest sensitivity towards electrical activity than any other animal. It can even sense the electromagnetic field of animals hidden beneath sand. This sense also assists with direction, as the Earth’s magnetic fields guide the animal. The lateral line again comes into play in this sense. It helps the shark to sense water vibrations, which is a particularly effective way of finding a fish thrashing about in its injured state.

Nature enthusiasts and researchers continue to increase their knowledge about these magnificent creatures, uncovering new and fascinating truths about their design and adaptations.