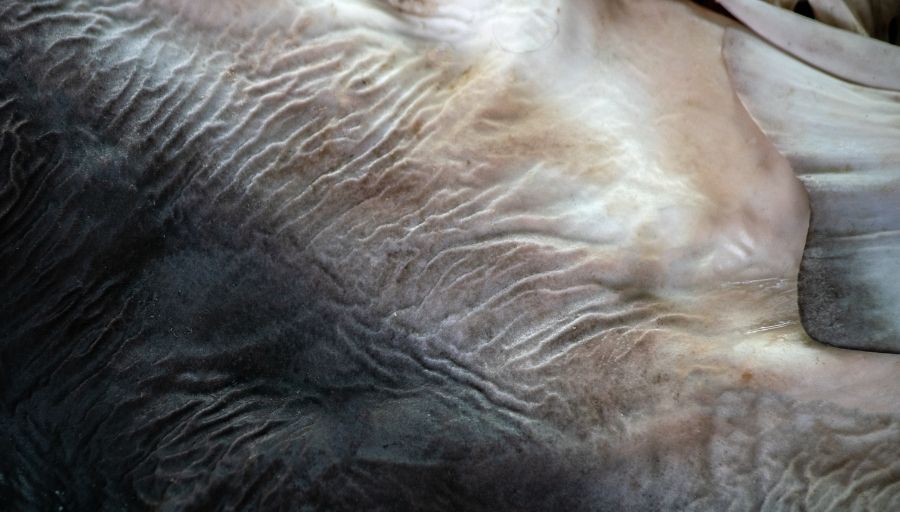 Shark skin is unique in many ways. It is characterised by its gray color and the contrast between its slippery appearance and its rough texture.

Sharks, like all animals, have been physiologically designed to suit their habits and habitats. Their skin is no exception. It displays an ingenuity in design and ensures that these creatures are aptly suited to their aquatic homes and hunting lifestyle.

The texture of a shark’s skin is very rough. Sharks have a central pulp cavity, a dentine layer, and an outer layer of enamel. These strengthen and protect the skin against injury.

A shark’s skin also helps it swim faster. Usually, when a body that large moves that quickly through the water, the water imposes great resistance against its movement. As a shark swims, however, there are grooves in its skin that water is able to flow through, thereby decreasing the resistance against the traveling shark. Shark skin is made of many tiny subunits called denticles, and the gaps between these denticles are the grooves that the water runs through.

Being able to move through the water is an essential ability of the shark’s, as this also generates the necessary body heat to keep the shark alive. Again, the skin of the shark plays a part in this process, as it has to be very thick in order to help the shark retain that generated heat. The largest living shark — the Whale Shark — boasts a skin thickness of about 10 centimeters (nearly 4 inches).

Do Sharks Have Scales?

Yes, sharks have scales. Dermal denticles are present on the shark’s skin and give it the rough texture that many associate these predators with. The shark scales are small structures that resemble hard, grooved teeth but are actually placoid scales.

Recent studies have shown that the design of shark scales have interesting (preventative) healing properties. Underneath a video that explains the benefits of shark scales.

Can You Cut Yourself On Shark Skin?

When we say a shark’s skin is rough, what do we mean, exactly?

We mean so rough you can cut yourself on it. The skin is so rough, in fact, that softer animals brushing against it can be badly injured. Such an incident is not exclusive to the animal realm either. Many cases of humans being cut from contact have occurred, often with bull sharks and mainly due to accidental contact. One case of someone who cut himself on a shark skin is explained down below:

A 50-year old man fishing in the Bahamas saw a bull shark approach his boat. The shark brushed against his arm and afterward hit his left leg with its tail in a regressive swinging motion, leaving behind a cut that the man described as a burning sensation.

Shortly after this attack, the man tied a tourniquet around his leg to stop the bleeding and returned back to port.

In short, it’s safe to say that a shark’s skin is very, very rough.

So rough, in fact, that it is actually used as sandpaper.

These denticle spines are arranged in a mosaic pattern — many many subunits acting together to create one structure — that surrounds the body of the shark like a helix. Because the sharks have no skeletal bones, the muscles used for swimming are attached directly to the inside of this structure.

What Color Are Sharks?

Sharks living on the bottom of the ocean and feeding off small crustaceans are typically more brown in color, aiding them to blend in with the sand in which they hunt.

This sophisticated method of camouflage means that these stealthy hunters are able to approach prey without being detected, a necessary skill for their survival and another factor that makes them one of the most feared aquatic predators.