Sharks are the natural choice for mythological figures and awesome tales, since they are steeped in mystery, well-known and feared amongst many.

While they are particularly common features of Hawaiian folklore, they have also been included in the mythology of the Australian Aboriginal people as well as the Indonesian tribes and the Indians of North America. There are even some accounts of sharks in Greek mythology.

In Hawaiian mythology, there were several main shark gods. It was commonly believed that, when a person died, their family could offer the corpse to become a shark.

The dead body was then believed to make a slow transformation into a shark, and the kahuna (a priest, sorcerer or magician) would then tell the family that specific markings on a shark’s body corresponded to the clothing worn by the deceased.

The family would put great trust in this particular shark to steer fish into their nets as well as to deter danger and even to harm and kill their personal enemies. This was known as the family’s “aumakua”, and it was called by the name of the deceased. 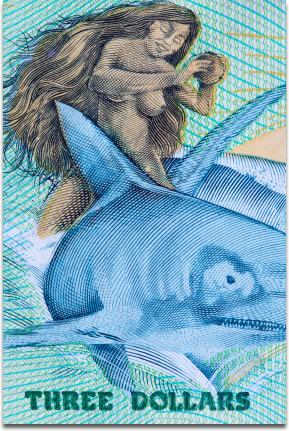 Close-up of a $3 bill from the Cook Islands.

In Hawaiian culture, there were a few particularly popular and well-known shark gods who were believed to be the guardians of the oceans.

Shark God Kamohoali’i: This is the most respected of the shark gods and was known for his ability to take on both human and fish forms.

Shark God Ka’ahupahau: A female, she was said to be born as a human with beautiful red hair. When she transformed into a shark god, she helped many people to escape from other predator sharks and was thought to live in Pearl Harbour.

Shark God Kane’apua: This shark god was the trickster brother of Kamohoali’i and Pele. He was thought to have performed amazing tricks and feats, including the preventing of two hills colliding.

Shark God Keali’ikau ‘o Ka’u: This shark god was believed to be the cousin of Kamohoali’i and Pele and protected the Ka:u people. Keali’ikau ‘o Ka’u fell in love with a human woman, who fell pregnant by him and birthed a green shark, known for helping people.

Shark God Kua: The Ka’u people believed that this was their ancestor.

Shark God Kane-i-kokala: This was a shark god that was revered for taking shipwreck victims to safety. His sacred fish was the kokala and those that believed in his existence would not touch or eat this fish for fear of displeasing him.

In Greek mythology, it was not allowed to eat shark meat at women’s festivals and there was a tale of Cerberus who saved Delia after a shark had gobbled her up. Eventually, they fell in love and he spent the rest of his life protecting Delia.

Certain tribes and cultures of the Pacific Ocean believed that Dakuwanga was a shark god that fed off lost souls.

Lamia was the daughter of Poseidon and was believed to guzzle children to try and satisfy her insatiable appetite for the hapless tots.

She was the mother of Skylla and Akheilos, both ancient sea-monsters and she appeared as a sizeable and vicious lone shark.

Some tales have it that the jealous wife of Zeus heard of Lamia’s affair with her husband and stole her children away, enraging Lamia and instilling in her a hatred for the children of other’s.

Because sharks remain such a mystery to us, even amongst scientists and researchers today, they continue to evoke a sense of the unknown, power beyond understanding and a hunting instinct that guarantees a sense of at least some trepidation amongst swimmers and surfers.