Sharks are famous for their acute and superior sense of smell. Their ability to smell the smallest traces of blood dispersed within gallons and gallons of seawater has long been a source of fear and dread amongst swimmers and surfers. In addition, they can smell a tiny part of their prey, even if this part or substance makes up only 1 out of 10 billion parts of the victim’s body! This ability also extends over hundreds of metres.

The nasal openings, or nares, are situated on the underside of the soft snout. There are two nares and each nare has two nasal openings. Water flows into these holes constantly, allowing scents from the environment to enter the canals and the nasal sacs. The water washes over the olfactory lamellae, which are skin folds. The sensory cells within the sacs send messages to the brain to report on the smells they pick up. The brain interprets the stimuli and provides information back to the shark regarding location, nature and distance of the prey. Interestingly, about 66% of the shark’s brain weight is accounted for by olfactory lobes. This is a significant proportion, underlining how important this sensory ability is. The brain distinguishes between the smell of potential prey and the smell of pheromones, indicating a potential mate. 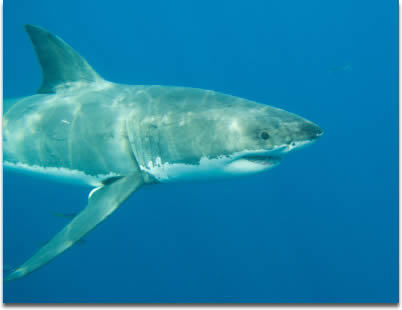 Because these nares are not ever used for breathing in the case of sharks, the entry of water does not interfere with the respiration at all. Being its sole purpose, the nose is even more adept at picking up smells;this was why it was created. This is also the reason they are not referred to as ‘nostrils’.

Taste and smell are, in fact, not two different sensory perceptions. Rather, they are variations of the same sense.

Any person who has had a blocked nose will remember losing their ability to taste as well.

Barbels are sensory projections near the nose openings and the mouth. They are called nasal barbels and act like whiskers as they feel foreign matter entering the canals to taste and smell it. Barbels are not present in all shark species. Those animals that do possess them have an increased ability to taste and smell as these amplify this sense.

As the shark swims, it automatically moves its head back and forth. This allows more water to enter into the nostrils, helping the shark to follow the scent accurately as it picks up speed. As it zigzags closer to the prey, it responds to the increased scent in one nare or the other, following it and effectively tracking its victim.

Because of the nature of the sensory organs, sharks do not know how their prey is going to taste until they have actually taken a bite, despite having been able to smell it beforehand. This has led to many incidents of prey (or potential prey) escaping as the shark decides that it does not like the taste once it has bitten into the flesh. Unfortunately, those powerful jaws are able to do major damage, perhaps even lethal, in one bite.