It has, to date, been almost impossible to gain an accurate idea of the speeds that the sharks are able to reach. This is due to several reasons

Those sharks that have swum next to boats in pursuit of bait frequently slow down eventually. However, it is not known whether this is because of fatigue, safety or if they simply lose interest. So, this does not provide an accurate reading of their abilities.

It has been established that smaller, lighter sharks are able to reach higher speeds than their larger, heavier counterparts. It is also clear that sharks are designed to swim fast only in short bursts (i.e. when chasing prey).

In a very general sense, sharks average a cruising speed of eight kilometres per hour (or five miles) and a pursuing speed of about 20 kilometres or 12 miles an hour. Sharks that are able to swim remarkably faster, such as the Shortfin Mako and the Great White, are thought to be able to do so because their blood is slightly warmer than that of other species. 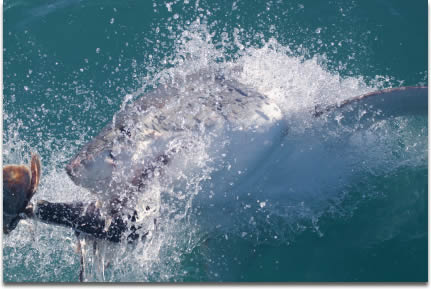 These specific species are able to maintain a regular internal temperature despite entering cooler or warmer waters. This ability minimises the amount of energy necessary to regulate body temperature so that this energy can be better used on achieving higher speeds. There are also many larger species that only average a cruising speed of about 2.4 kilometres an hour. These variations make it clear that average speeds reveal little about specific shark species.

The Shortfin Mako Shark is known as the fastest of all its peers. Its body is particularly streamlined and is aided by a crescent-shaped (or lunate) tail, which helps the Mako to propel itself even more effectively through the water. In addition, its warmer blood retains energy, better spent catching hapless prey. Despite claims from researchers and fishermen, official reports have cited 50 kilometres an hour as the Shortfin Mako’s top speed. The less formal reports claim far higher speeds, though.

The Great White comes in closely behind with an official top speed of about 40 kilometres per hour. Significantly, the top speed of any shark is not maintained for extended periods of time. Rather, they occur in brief bursts.

The major influencing factors that determine the maximum speed of a shark are its weight, length and fin shape. Experiments continue in order to determine the average and top speeds of various species. It is hoped that these will reveal more secrets about these marine mysteries.