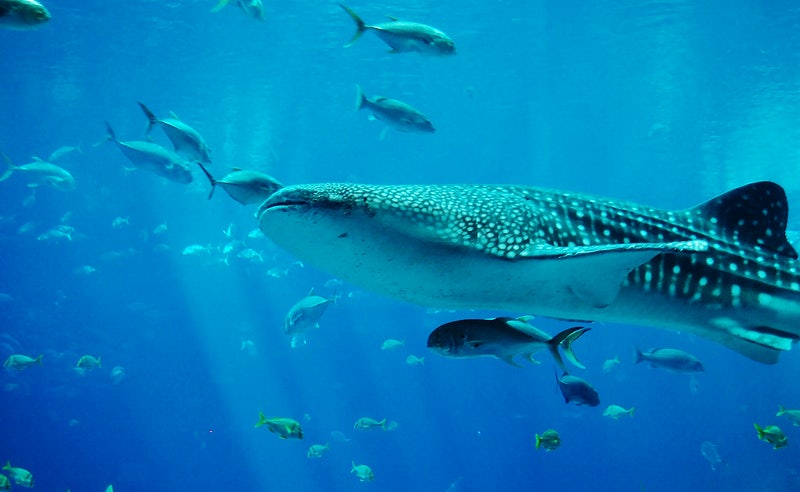 The animal kingdom is one which is full of different kinds of relationships, some are very remarkable whereas others are curious. If the relation between two species is beneficial for both of them, it is termed as symbiotic relation – sharks and fishes do share this type of relationship. As you already know that fishes swim with sharks only for the need of food, small fishes clean the surrounding for the sharks and in turn sharks provide them with food and protection from the enemies. Now we will take a look and explore more about why fishes swim with sharks and who they are!

Why do fishes swim with sharks?

Despite all the danger coming towards them in the form of sharks, you must be curious to know why small fishes prefer to swim along with sharks.  The answer to this question is that small fishes float with sharks only to get food and nourishment. They feed on the leftovers of the shark’s food; they clean the environment and the scraps of food in the shark’s teeth whereas sharks provide them shelter from the predators as they are more vulnerable to other species. Swimming of the small fishes around the sharks may sound like a risky proposal, but in reality both species get benefitted from this relation.

Which fishes like to take a swim with sharks?

There are many fishes that travel with the sharks but the two most important fishes are Remoras and Pilot fishes. These fishes attached themselves to sharks because of food and protection provided by sharks and in turn they remove parasites which irritate the sharks. Remoras attach them on the underside of the shark whereas pilot fish are usually found near the mouth of the sharks. Thus it is a mutualistic type of relation in which both the species are greatly benefitted.

What kind of relation do sharks and remoras share?

Sharks and remoras are mutually connected with each other. Remoras feed on the crumbs dropped by the prey of sharks and remove parasites from the skin and mouth of the sharks to make them happy. In return, remoras receive excess food, defense from the predators and a free traveling trip without any worry all over the ocean. Both get benefitted from the relationship! Further studies show that the behavior of sharks changes in the presence of sharks, they slow down and allow remoras to attach to them without being worried about their life.

Sharks do not attack remoras – why?

Despite of their aggressiveness and predatory nature, sharks do not harm remoras.They do not eat remoras because both are mutually connected with each other, as remoras clean the surrounding water and creates a healthy and clean environment around the sharks which they loved the most whereas sharks provide them enough protection so that they can freely swim in the ocean and the food which is more than enough for remoras. Thus sharks and remora are dependent upon each other and help to maintain a balance in the ocean ecosystem.

What relation do sharks and pilot fish have?

The symbiotic relation between sharks and pilot fish benefits both the parties, the pilot fish take refuge from the enemies, and eat the ectoparasites and scraps of the sharks thus helping the sharks to live in a germ free environment whereas sharks needs a company of pilot fish to keep their gills free from parasites and germ whenever they had to travel a long distance. Moreover, the pilot fish are called cleaner fish as they swim into the mouth of the sharks and clean the particles of food left into the teeth of the host. Sharks and pilot fishes shared an extremely mutualistic relationship as both of them take the advantages of their bond.

Sharks and fishes are the dynamic creatures of the aquatic ecosystem, fishes provides benefits by removing parasites and eating leftovers of the sharks, thus keep the environment clean only to keep sharks free from parasitic attack whereas sharks in turn provides them with sufficient food and protection from the predators so that they were able to swim freely in the ocean. No doubt, the ocean is a very hazardous place to thrive but having a powerful predator protecting you for its own perk shows the bond and the level of trust between sharks and small fishes like remoras and pilot fishes that’s truly intriguing!